Wholesome Fun: How Wholemeal Flour Can Add to Your Baking 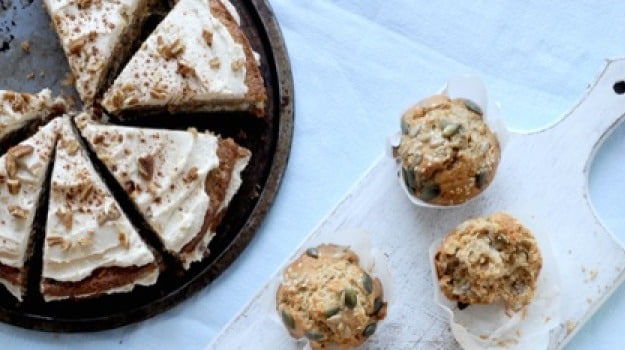 Wholemeal flour can put fun, flavour and texture into your baking as well as adding extra fibre to your diet. Try these very different recipes - one a rich, spiced sweet potato cake with cream cheese icing, the other for savoury, seeded breakfast muffins

Wholesome" is an adjective I shy away from, especially when baking. Where I seek pleasure and excess, "wholesome" promises moderation and salutary benefit. I'm haunted by visions of "healthy" cakes with all the flavour and interest of a piece of cardboard, or loaves as dense as lead weights. And so for a long time I avoided wholesome baking and anything that threatened to come close to it - wholemeal and wholegrain baking were off the cards.

Where wholemeal flour is called for, it must be used with care: greater flavour comes at the expense of rise; a coarser texture can end up dry and crumbly. But these problems are easily mitigated by adding a little extra liquid (to compensate for wholemeal flour's greater capacity for absorption) or by combining it with white flour to achieve a balance between taste and texture. In bread doughs, wholemeal will mean you have to knead longer to build up elasticity.

Just make sure you buy carefully when choosing wholemeal flour: strong versions are best for bread whereas "plain wholemeal" is a wiser choice for cakes and biscuits.

I've called for sweet potato here because its mild sweetness works well in cakes, but you should feel free to adapt according to what you have sitting around in the vegetable drawer: carrots are the usual choice, but parsnip, potato and butternut squash are worthy substitutions, too.

1 Preheat the oven to 180C/350F/gas mark 4 and grease and line the base of a deep, 20cm round springform or loose-bottomed tin.

2 Cream the butter and sugar until well aerated, smooth and creamy (if it's still heavy and waxy, beat for a little longer, or warm the butter very slightly in the microwave). Stir in the grated sweet potato and the three eggs.

3 In a separate bowl, combine the flour, baking powder, spices and salt, then add this to the wet mixture and stir until smooth. Fold in the dried fruit and chopped pecans, then spoon the cake batter into the prepared tin.

4 Bake for 40-45 minutes in the preheated oven, until well-risen and just beginning to shrink away from the sides of the tin. A small knife inserted into the very centre of the cake should emerge clean if the cake's cooked through. Once cooked, leave to cool in its tin for 10 minutes before unmoulding on to a wire rack and leaving to cool completely.

5 For the icing, beat the butter with the sugar and cinnamon until very soft and smooth. Drain any excess liquid from the cream cheese, then mix it into the butter and sugar a little at a time until you have a smooth, sweet icing. If it's a little runny, return it to the fridge for a while.

6 Halve the cooled cake horizontally to create two thinner layers, then slather one side of each layer generously with the icing. Stack the two halves so there are two layers of icing. If you have leftover icing, you may be able to ice the sides, too. Dust the top with a little extra cinnamon and maybe some chopped pecan, too.

This is a one-bowl recipe, which might be as much as anyone can or should commit to for a morning bake. And thanks to a generous hand with the seeds and a dose of wholemeal, these are as filling as they are easy to make. You could swap in finely chopped walnuts, hazelnuts or peanuts for the seeds if you prefer.

2 Whisk the oil, peanut butter, milk, eggs and sugar together in a large bowl. Once combined, add the flour, baking powder and salt and stir gently until smooth. Mix in all but 2 tbsp of the seeds.

3 Divide the batter between the muffin cases until they're no more than 3/4 full, then scatter the remaining seeds on top. Bake for 20 minutes or so in the preheated oven, testing with a small knife to check that the centres are set.

4 When they're ready, they ought to be well-risen and springy to the touch. Best eaten fresh from the oven.