World War 2 And Food Rationing, This Is What Gave Birth To Your Favourite Apple Crumble

Crisp, crumbly and ever-so-delightful, apple crumble is probably one of the easiest dessert preparations around 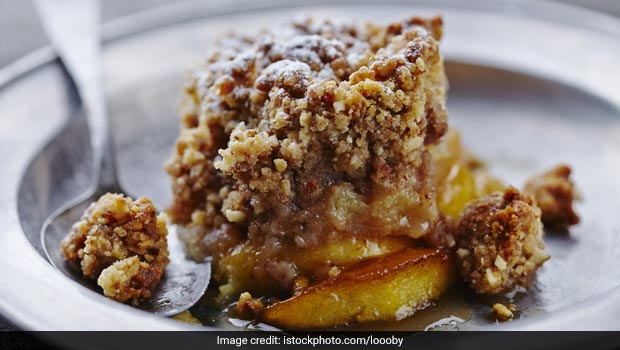 The Second World War lasted for six years and resulted in countless casualties. Often dubbed as one of the darkest chapters in history, the Second World War brought the world to a standstill; shops were shut, people were left unemployed. As the war progressed, food scarcity became a major scare and due to inflation and rationing, the accessibility to basic food ingredients became a problem. In these hostile times, British housewives came up with many recipes; some of these recipes were lost in time, but some stayed and even gained cult status with time. One such British recipe is that of apple crumble.

Crisp, crumbly and ever-so-delightful, apple crumble is probably one of the easiest dessert preparations around. But back in the day, this dessert among a few others brought a smile on many faces in days marked by gloom and despair. Due to strict food rationing, British households had a limited access to basic ingredients like flour and sugar. Indulgent treats like cakes and puddings were becoming a luxury not everybody was able to afford. People started missing their baked and sugary goods. And, in a bid to have something as yummy, with the limited number of ingredients, apple crumble became one of the most sought-after dishes of the time.

The 'Sweet' Accident That Gave Birth to the Chocolate Chip Cookie

Apple crumble is a crispy dessert made with baked chopped apples topped with butter, flour and brown sugar, resembling like breadcrumbs. Some people also add oats to the dessert, since it bakes well and lends a beautiful texture. A traditional apple crumble is often flavoured with a host of winter spices like cinnamon, nutmeg and ginger. You can enjoy the crumble all by itself, or pair it with custard, as it was done traditionally. Nowadays, many restaurants also serve it with cream or ice cream.

Apple Tea: Weight Loss Benefits And How To Make It At Home!

One of the most important aspects of apple crumble is the balance. While baking apple crumble, you must ensure correct balance of the crumbly toppings and chopped apples. Sometimes, the wrong amount of either the fruit or the crumble may compromise the texture of the dessert.

You can also mix other fruits and herbs with your apple crumble. For instance, rhubarb's tarty essence goes very well with apples; apple rhubarb crisp is a rather popular dessert in U.S bakeries.

Apple crumble also provides a good room for your left-over oats. Yes, you heard us! Oats can impress even when it is not consumed in its usual porridge form. Oats, apple and brown sugar mingle very well with each other when baked.

For those who are not too fond of apples, may not lose heart. This delicious baked dessert can be made using other fruit bits too. Peaches, berries, or pears are some of the common and popular substitutes for apples around the world.

Here's a delicious recipe of apple and oats crumble you can try at home. Here are three other interesting apple crumble recipes that are sure to impress.