Would You Dare To Try The Dancing Squid Dish? This New Japanese Food Trend

What's your weirdest and most terrifying culinary experience till date? We bet nothing as bizarre as a dead squid coming alive on your plate in the most abnormal way. 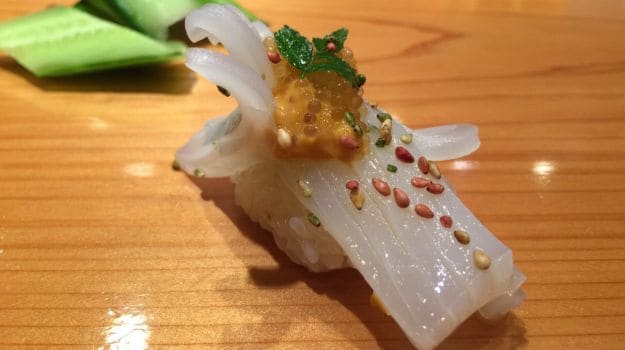 Highlights
What's your weirdest and most terrifying culinary experience till date? We bet nothing as bizarre as a dead squid coming alive on your plate in the most abnormal way. Unimaginable, right? Japan's Aomori city restaurants have been serving a dish called Sashimi Bowl or Odori-Don that is topped with a squid; but there is a catch. The dead squid comes alive for a few seconds after pouring some soy sauce on it. An old video of the 'dancing squid' has surfaced online and has taken the internet by storm. It has got many food explorers revere the dish and we must tell you they like it too. If you are wondering how a dead squid can start moving its tentacles, then there is a science behind it.

Before we go ahead, take a look at the 'dancing squid'.

What's the science behind the 'dancing squid'?

First, the squid like creature on the dish is actually a cuttlefish and it doesn't really dance; in fact, it isn't alive at all. Basically, most of the tissue in an organism that is recently dead or killed is still alive for a few minutes or so. So even though the brain is not functioning, the tissues will still respond to the stimuli. Scientifically speaking, it is because of the latent electrical impulses that are travelling through its muscle neurons that the squid responds to soy sauce.

Now why and how does it only respond to soy sauce? The answer is, the squid's muscles still retain Adenosine triphosphate (ATP), the main source of energy for muscle contractions. So, the sodium chloride or salt present in soy sauce is absorbed in the dead creature's body, it triggers muscle spasms that looks like it is dancing. These cuttlefish are brought fresh in the kitchens and cooked just a few minutes before serving the dish.

The dancing squid is available anytime of the year in a couple of cities in Japan and if you are in the mood for an unusual dining experience, you may try it sometime when you are visiting Japan. Dancing squid has been doing the rounds on the internet for a while now and people are posting their experiences of the same. Check out these Instagram videos that have people making the cuttlefish come alive. We dare you to watch all the videos!

Here's how the dancing squid is prepared-

Did you find this appealing or appalling? Do let us know if you would give it a try!