5 out of 10 Urban Indians are Trying to Lose Weight 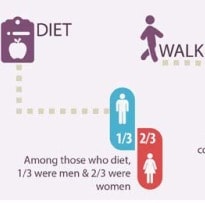 Studies since 2012 have estimated that over 74% of urban Indians are overweight (i.e. BMI over 23 kg/m2). A recent survey conducted by Fitho, a leading wellness services organization, showed that along with increasing weight, there is also increasing awareness and 5 out of 10 urban Indians are trying to lose weight.

While 40% of the overweight people have intent to lose weight but are not taking action to control their weight, the remaining 60% are making an effort to lose weight. The survey revealed that looking good, keeping fit and staying confident are the major reasons for the women and men under 35 to lose weight, while people aged over 35 and the heavily overweight (BMI>25 kg/m2) are doing it primarily for a better health.


How Are Indians Trying To Lose Weight?

Urban India is getting weight conscious. While data has shown that 73% of the Indian urban population is overweight, a recent survey conducted by FitHo revealed that 60% of those overweight urban Indians are making an effort to lose weight. The reasons vary, the means are multiple, the range of age-group is wide; but, the goal is the same - losing those extra inches, looking & feeling better. Here's a quick glance at the results of the survey.

Fitho founder, Dhruv Gupta & author of popular weight loss book, Losing It said, "While many findings in the survey correlated with estimates around the obesity levels in India and their impact on people's health through lifestyle disorders, it was very interesting to note motivational factors for people, and their health habits. For example, 1/4th of the people don't have any mid-day snack, and 14% ate fried food during the day as their mid-day snack. There was a ton of information that will help us improve weight management programs for people."

Data: The survey showed very interesting data around the attitudes and drivers for motivation to lose weight & get fit. Among the top 3 reasons to lose weight

Looking Good: This was the primary factor for people in the younger age group (under 35) and the top reason among women.

Improve Confidence: Surprisingly, improving confidence was a the top reason among men

Better Health: This was most common among those who were obese or over the age of 36.

Insight: At a younger age, physical appearance seems to be strong driver to get fit. Among women, looking better was the dominant reason. For men, losing weight had a strong correlation with confidence. People who were either over 35 or those who were technically obese (BMI>25 kg/m2) were driven by a need to improve their health. With increasing income levels, sedentary lifestyles & genetic tendency of Indians, weight related lifestyle disorders are becoming more common, and medical practitioners are recommending their patients to lose weight. This could be a driving factor for 'better health'.

How Are They Trying To Lose Weight

Among those who were making an effort to lose weight, their means were varied:

Diet Control: This group was 66% women

Walking: The most common physical activity

Gym: Working out in the gym was the least popular activity, and men were 3 times more likely to use the gym than women

Insights: Women are twice are likely to use diet control than men. And men are 3 times are likely to join the gym than women. In India due to multiple factors, we see men with a stronger affinity towards physical exercise, especially if it is out-of-home.

Yoga is still more popular than joining the gym due to cultural factors. People who go to the gym are still a small number, but growing steadily. Of the diet control group, 1/3rd were men, and growing. This is showing a trend that more men are understanding that weight loss & improved health is a combination of diet & exercise. Walking is by far the most common physical activity.

People who ate most of their meals out weighed on average 12 kg more than those who ate home cooked foods.

People who were non-vegetarians weighed 5% more than the vegetarians. And those who consumed alcohol were 6 kg heavier than teetotalers.

Insight: There is a strong correlation between what people eat and their weight, and the data confirms that. Research has shown that a mid-day snack lowers cravings at meal times, leading to smaller meals, and this is in correlation with the data. People who ate out have lower control over meal portions or cooking methods, typically leading to higher calorie intakes, and thus higher weight. But the difference of weight was dramatic.

Alcohol leads to fat storage in multiple ways, so it is no surprise that teetotalers weighed less. Those who eat non-veg should have higher protein intake, thus reducing their cravings, but there are other factors that could affect their weight: for example, many people eat out non-veg at restaurants, where the caloric value of their meals is higher.

Data: Among the overweight (with a BMI over 23 kg/m2), heart disease was most common at over half the population data. Diabetes was 2nd most common at 26%, and thyroid/hormonal was at 22%.

83% of those reporting back/knee pain were overweight or obese!