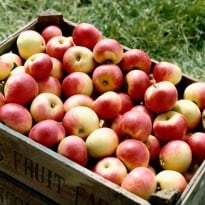 A waxy compound found in apple peel may help reduce obesity and its associated health problems by increasing the amount of muscle and brown fat, two tissues recognised for their calorie-burning properties, a study says.

The study conducted at the University of Iowa, US, found that the compound known as ursolic acid helped mice burn calories and shed weight, besides keeping pre-diabetes and fatty liver disease at bay, even when they were being given a high-fat diet.

"From previous work, we knew that ursolic acid increases muscle mass and strength in healthy mice, which is important because it might suggest a potential therapy for muscle wasting," says Christopher Adams, associate professor of internal medicine, who led the study, the journal Publric Library of Science ONE reports.

"We tested ursolic acid in mice on a high-fat diet - a mouse model of obesity and metabolic syndrome. Once again, the compound increased skeletal muscle. Interestingly, it also reduced obesity, pre-diabetes and fatty liver disease," said Adams, according to an Iowa statement.

"Since muscle is very good at burning calories, the increased muscle in ursolic acid-treated mice may be sufficient to explain how the compound reduces obesity. However, we were surprised to find that it also increased brown fat, a fantastic calorie burner. This increase in brown fat may also help protect against obesity."

Promoted
Listen to the latest songs, only on JioSaavn.com
Until quite recently, researchers believed that only infants had brown fat, which then disappeared during childhood. However, improved imaging techniques have shown that adults do retain a very small amount of the substance mostly in the neck and between the shoulder blades.