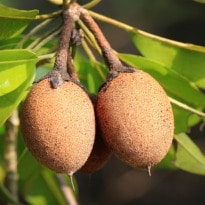 Various studies have shown that consuming certain foods rich in antioxidants may help in preventing and fighting cancer. A new collaborative study conducted by Indian scientists at the Indian Institute of Science (IISc) and the Institute of Bioinformatics and Applied Biotechnology in Bangalore, reveals the anti-cancer properties of the sweet and succulent fruit - chikoo.

Chikoo is popularly eaten in India and is native to central America. Also known as sapota (manilkara zapota), it is packed with dietary fibre, tannins and antioxidants. The study was published in the journal 'Scientific Reports' and it shows that the methanolic (alcoholic) extracts of the whole fruit possess certain active phytochemicals (plant-derived compounds) that can help in killing cancerous cells (a process called apoptosis). Phytochemicals are known to block the action of cancer causing cells on target tissues.

"There was a preliminary study which used two of the phytochemicals isolated from Sapota fruit on cancer cell lines. Ours is the first study that examined the whole fruit methanolic extracts which explores anti-cancer properties of the same on different cancer cell lines and on animal models. The results indicate that inclusion of Sapota fruit in our daily diet may protect from genesis and progression of cancer," says Sathees C. Raghavan, Associate Professor at the department of Biochemistry, IISc.

According to the International Agency for Research on Cancer, one million new cancer cases are reported in India every year and the figure is set to double in 20 years. Out of the estimated eight million people globally who died of cancer in 2012, nearly 700,000 deaths were in India. The various studies that are being conducted on plant derived dietary substances and their diverse chemical compositions offer a glimmer of hope for suitable alternatives for treating various types of cancers.

Raghavan explained, "We have tested its effect on cancer cells derived from different cancers such as leukemia, breast, ovarian and lung carcinomas. We found that it induces apoptosis in all types of cancers with varying efficiencies. We also found it slowed tumour progression in mice. Tumor containing mice that were treated with Sapota extracts lived three times longer than untreated mice."

Promoted
Listen to the latest songs, only on JioSaavn.com
Researchers found that the chikoo extract not only decreased tumour progression in mice induced with breast cancer but it also increased their life span by three folds. "The next step is to find out the principal compound or compounds that lend chikoo such anti-cancer properties," he concluded.