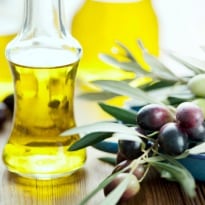 Olive oil leads to satiety, shows a study that points out the mechanism behind it.

Reduced-fat food products are gaining popularity. More and more people are choosing "light" products in an attempt to lose weight, or at least in the hope that they would not gain pounds.

But whether these products are effective or not is a matter of dispute: while it is true that they contain fewer calories, people tend to overcompensate by eating more if they do not feel full.

Now a study has shown how "natural" oils and fats regulate the sensation of feeling full after eating, with olive oil leading the way.

So what makes this oil so effective?

Over a period of three months, the study participants ate 500 gm of low-fat yoghurt enriched with one of the four fats or oils every day -- as a supplement to their normal diet, reports Science Daily.

Promoted
Listen to the latest songs, only on JioSaavn.com
"The olive oil group showed a higher concentration of the satiety hormone serotonin in their blood. Subjectively speaking, these participants also reported that they found the olive oil yoghurt very filling," he added.

During the study period, no member of this group recorded an increase in their body fat percentage or their weight.

Comments "Our findings show that aroma is capable of regulating satiety," Schieberle said. "We hope that this work will pave the way for the development of more effective reduced-fat food products that are nonetheless satiating," he said.