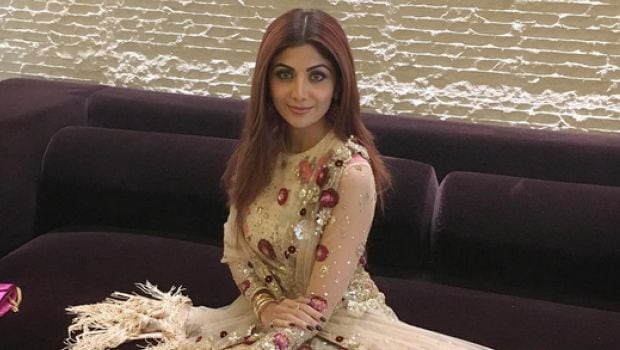 Highlights
Shilpa Shetty has launched her new health website, ‘Shilpa Shetty Wellness Series’ recently and one of its first episodes which saw the actress sharing her warm up routine took the internet by storm last week. Her warm up routine comprising of simple exercises of wrist rotation, wrist flexion and extension, shoulder rotation, sideward bending has created a stir amongst all her fans and fitness enthusiasts who dream of having a svelte body like the actor.

"My intention to initiate this channel is mainly for those people who cannot afford a gym or a nutritionist and also don’t get enough time to take care of their fitness, especially working women," Shilpa Shetty said at the launch of the event. The actress has previously shared her diet secrets in a book titled, ‘The Great Indian Diet’, which was co-authored by nutrition and fitness expert Luke Coutinho. Prior to that Shilpa also broke new grounds when she released a yoga DVD way back in 2008.

Shilpa Shetty's funda behind fitness is simple, “I keep my heart happy, stay active and make sure that I eat right, and chew my food. When your heart is happy, your mind is happy and vice versa”, she revealed in one of her interviews aired on Zoom. Going by the series of her DVD’s, books, and web series, it is evident that the actor is more than happy to share her secrets with the world.The actress who’s been a fitness icon ever since she sashayed into the industry swears by yoga, and practices it for about an hour, at least 3 to 4 times a week. It is interesting to note that the actor encountered yoga a few years back on the recommendation of her physiotherapist as a cure to her neck pain. But over the years, the actor grew so fond of it that she became the poster-girl of the exercise form and released DVDs promoting the same. Her favorite asanas include Surya Namaskar, Vrikshasana, Marjari asana, Padahastasana  and Dhanurasana. The actor feels that yoga has the power to sooth the mind body and soul.

She also meditates for about ten minutes after yoga.  Apart from Yoga, her workout regimen includes a regular dose of cardio and strength training. Her strength training workout is further divided into upper and lower body workouts, where instead of relying on light weights, the actor opts for heavy weights to shape her muscles. After her workouts, the actor takes protein shake, eight black raisins and two dates.

(Yoga for a Flat Tummy: 4 Poses You Must Try)

The actress who is a mother to a four-year-old son recalls the fat-shaming she had to encounter post her pregnancy, as one of the most traumatic experiences. Shilpa who recently lent her sympathies to actress Kareena Kapoor who went through a similar scrutiny, said in an interview "I can understand that emotion (of being judged), especially as an actress and someone who has been synonymous with having a good body and (being into) fitness."

Shilpa Shetty also said that she didn’t step out of the house for seven months, and the first time that she did go out with her husband for lunch five months after her delivery, few ladies sitting across the table mocked her for the weight she hadn’t shed.  Shilpa Shetty who was size 16 post her pregnancy, which was double the size she was before having her son Viaan, lost a whopping 32 kilograms  and the credit goes to her strict diet and work out regime.

She shared in an interview how after her pregnancy she would eat nearly four eggs, as eggs keep your stomach full for a long period of time. When you are stressing about losing too much weight, you think of all the food you are not going to have. This leads to the body producing extra cortisol, which slows down metabolism, thereby weakening your resolve. Losing weight is more of a mind game than a fitness, the actor believes. To shed her post pregnancy weight she started out light, regular cycling and walking, and only gradually she increased the intensity of her workouts in the gym to shed those extra kilos and within a matter of 10 months she had shed half of her pregnancy weight.

The actress’ diet is a great example of a balanced diet. For breakfast,  the actor has a glass of hot water and papaya smoothie with lemon. She also has different juices everyday like aloe vera, amla, pomegranate, beetroot green apple cucumber and spinach. She follows it with milk tea with brown sugar and two eggs. For her meals, she likes to take carbohydrates, especially brown rice, brown pasta or brown bread all of which are low in glycemic index. Most of her meals are made with olive oil. She ends her meals with a piece of jaggery. If time permits, for evening snacks Shilpa has two eggs with brown toast and a cup of tea. Her dinner, which she ensures to take before 8 pm (at least 3 hours before going to bed for better digestion), comprises of salad, soup and stir-fried vegetables or paneer.