Too Much Exercise Can be Dangerous 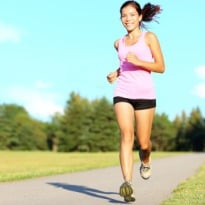 A study published in Mayo Clinic Proceedings and led by Paul Williams of the Lawrence Berkeley National Laboratory and Paul Thompson of the Department of Cardiology at Hartford Hospital, focused on 2,400 heart attack survivors and found that the more exercise they did, the less risk they faced of dying from heart disease, but only up to a point.

While benefits to the heart when walking and running are the same, it takes twice as long to burn the equal number of calories when walking rather than running. Benefits began to decline among those who ran more than 30 miles (48 kilometers) per week. Among walkers, the turning point, when benefits were lost, was seen in those who did more than 46 miles per week, or 6.5 miles per day.

Even more, there was a statistically significant cardiovascular risk associated with the highest levels of exercise, said the study. Results suggest that the benefits of running or walking do not accrue indefinitely and that above some level, perhaps 30 miles per week of running, there is a significant increase in risk," the study said. "Competitive running events also appear to increase the risk of an acute event."

The researchers cautioned that since their study focused on heart attack survivors, their results might not be generalizable to the population at large.

You Still Need Some Exercise

Experts generally recommend two and a half hours of moderate exercise each week, or 75 minutes weekly of vigorous exercise for a healthy heart and body. In previous studies, 5 hours of vigorous exercise per week has been regarded as the safe upper range for long-term heart health and life expectancy. "For patients with heart disease, almost all should be exercising, and generally most should be exercising 30-40 minutes most days," said Carl Lavie, a cardiologist at the John Ochsner Heart and Vascular Institute in New Orleans. "But from a health stand-point, there is no reason to exercise much longer than that and especially not more than 60 minutes on most days."