Why Egg-Yolks are Good for You 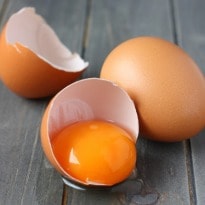 Ditching the egg-yolk has always been an ideal option for the weight-obsessed. But why boycott the most delicious part of an egg when research says you should embrace it.

You might think yolks are high in fat and cholesterol but scientists believe their role in raising cholesterol levels is minimal and in fact they're the most nutritious part of an egg. According to nutrition coach Liz Wolfe, NTP and author of 'Eat The Yolks', whole eggs don't raise the risk of heart disease and in fact, it may be worse for your health to not eat the egg yolk. (As reported in huffingtonpost.com)

Egg yolks, along with other sources of saturated fat and cholesterol, came under fire in the wake of research by Nikolai Anichkov at the turn of the 20th century. Anichkov fed rabbits pure cholesterol and found that their arteries clogged up with plaque. This lead him to believe that cholesterol triggers heart disease and since then there have been many questions raised about the relationship between the two. Wolfe counters this result by saying that, "Rabbits have nothing in common with human bodies... and cholesterol isn't part of their diet anyway."

Researcher Ancel Keys made headlines in the 1950s with his Seven Countries' Study, which almost single-handedly set the line of thinking on saturated fat that prevails today. Keys claimed that after looking at the average diets of populations in seven different countries, he was able to determine that those who ate the maximum amount of animal fat had the highest rates of heart disease. But his analysis was flawed.

Although Keys' data did show a connection between fat and heart disease, he couldn't demonstrate that the relationship was causal. Furthermore, while mortality rates for heart disease were higher in the countries that consumed the most animal fat, deaths from nearly ever other cause were lower - and overall life expectancy was higher.

In 2010, The American Journal of Clinical Nutrition published a meta-analysis - the collected findings of 21 different studies - which stated that "saturated fat was not associated with an increased risk of coronary heart disease, stroke or coronary vascular disease".

Earlier this year, Time magazine reversed the argument it made in a 1984 cover story claiming eggs and other high-fat foods were dangerous.

What's So Great About Egg Yolks

Promoted
Listen to the latest songs, only on JioSaavn.com
Besides its great taste, egg yolks are power packed with amazing health benefits. Wolfe suggests the real cause of heart disease lies in the inflammation caused by "chronic stress levels and the over-consumption of vegetable oils and processed carbohydrates." According to Wolfe, egg yolks are "a great source of vitamin A, which is good for skin, B vitamins for energy and choline, which also supports brain health, muscles and is necessary for a healthy pregnancy".

The saturated fat in yolks is also necessary for hormone production and the body's absorption of vitamins and minerals. If you control your overall calories, whole egg consumption won't cause weight gain, despite its fat content.

How to cook with egg and top recipes