Carlos Elizondo, better known as 'Tito Charly' on YouTube, has become an overnight internet sensation thanks to his adorable cooking videos. 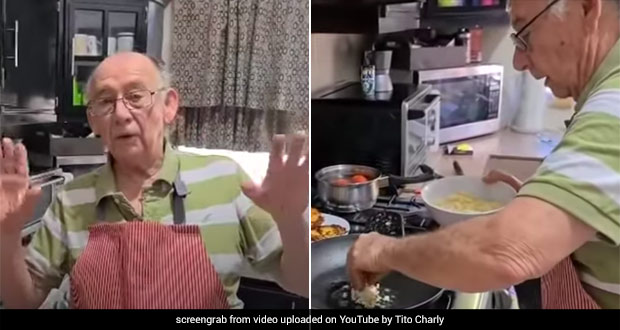 Tito Charly is winning the internet with his adorable cooking videos.

It is often said that necessity is the mother of invention. When we undergo the most dire of consequences, that's when we come shining through with something new. This is exactly what happened to an 80-year old Mexican man who was laid off during the Coronavirus pandemic from his grocery store job. But this was a minor setback for him, as he soon decided to launch his own product line and begin a YouTube channel in his name to share his recipes with the world. Carlos Elizondo, better known as 'Tito Charly' on YouTube, has become an overnight internet sensation.

Tito Charly's channel was founded on 25th May, 2020 and it has raked in over 400k subscribers. The total number of views on his channel is also rapidly increasing and has exceeded the 1 million mark already. The description on his YouTube channel's 'About' section reveals the philosophy behind beginning the project, "At my age I still believe that everything can be achieved, when you do things with the desire to live." He makes delicious Mexican recipes such as grilled cheese with bacon and chorizo, dried meat with piloncillo, and the likes.

Charly's three children and six grandchildren have encouraged and supported him in his journey to make his name in the world of food content. One of his daughters helps record videos and narrates some segments of the videos as well, while his grandson aids in marketing them online on YouTube. The recipes are simple using household ingredients, and Tito Charly's face lends an aura of adorableness to the videos. Although the videos are recorded in Spanish, they can be understood with the help of the translation feature in the subtitles.

Take a look at one of the five videos currently on his YouTube channel:

That's not all that the enterprising grandfather is upto. He is also working at marketing his own range of products such as dried meat, cheese, chorizo and more. He has sourced these products through local artisans and is labelling them with his own brand name. Charly's daughter helps him fulfil these orders through WhatsApp, and he also uses them while cooking his own recipes. We wish him all the very best for his future endeavours as well!