In his Instagram post that he shared on Wednesday, Ayushmann wrote that 'Chandigarh Kare Aashiqui' team is the "first one in India to finish shooting an entire film while battling the Coronavirus." 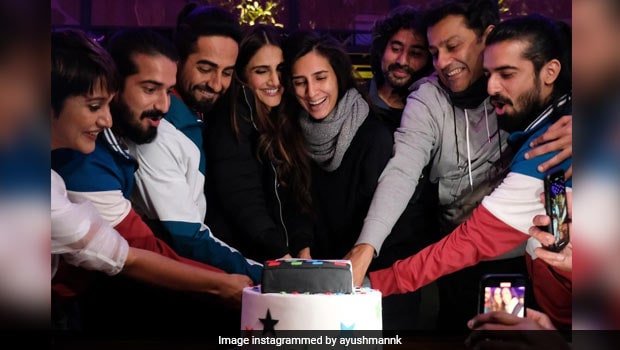 Aushmann Khurrana will be seen opposite Vaani Kapoor in his next

Ayushmann Khurrana, who has been shooting in his hometown Chandigarh for his upcoming movie 'Chandigarh Kare Aashiqui', penned an emotional note upon the completion of the film. Directed by Abhishek Gupta of 'Rock On' fame, 'Chandigarh Kare Aashiqui' is a light, romantic drama starring Ayushmann Khurrana and Vaani Kapoor in the lead. It is the first time they are paired opposite each other, and the fans are rather excited for their chemistry on-screen. In his Instagram post that he shared on Wednesday, Ayushmann wrote that 'Chandigarh Kare Aashiqui' team is the "first one in India to finish shooting an entire film while battling the Coronavirus." Further, Khurrana also thanked his director and producer for pulling off the feat with precautions.

While the movie will hit the theatres in the coming year, the cast and crew did manage to have a wrap-up party with a limited number of guests. Both actor Vani Kapoor and Ayushmann Khurrana shared pictures from the party. Ayushmann, in his Instagram post, also gave us a glimpse of the special cake that made it to the wrap party. The delicious-looking cake was covered in white fondue and embossed with colourful stars and beads. There was also black-box like a motif on the top of the cake. The stars were all smiles as they cut the 'star-studded cake' to mark the end of their final schedule.

(Also Read:Andhadhun Actor Ayushmann Is Drinking This Delish Winter Beverage: 3 Reasons Why You Should Too!)