Farhan Akhtar's daughter Akira Akhtar's first birthday cake as a teenager was designed in the shape of a gramophone. 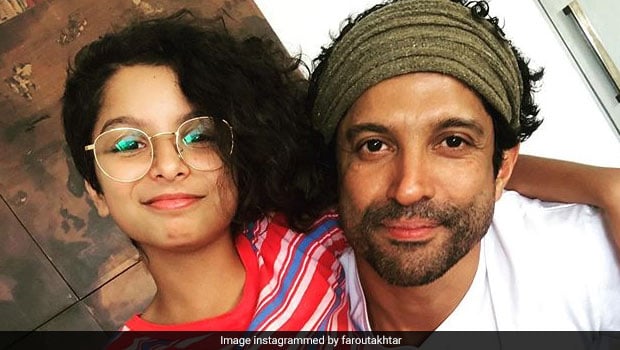 Farhan Akhtar's daughter Akira Akhtar just rung in her first birthday as a teenager. The 13-year-old had her birthday celebrations on January 12, 2020 and her parents both uploaded sentimental and sweet messages for her. "Love you more than you know," wrote Farhan Akhtar in his post sharing a click of hers wearing boxing gloves and posing just like her father who is prepping for 'Toofan', a sports biopic based on boxing. Akira also received a message from her mother, Adhuna Bhabnani, who welcomed her into the 'special realm' of being a teenager.

Apart from all these wishes that poured in for Akira Akhtar, her first birthday cake as a teenager was indeed a special one. She had a birthday cake designed in the shape of a gramophone, complete with an edible record playing on it. "When the cake looks too good to cut," wrote Farhan Akhtar in the story sharing a picture of Akira Akhtar cutting her cake. Farhan also tagged Twenty One Pilots in the Instagram story, who is apparently Akira's favourite band. The record from their album 'Trench' featured on the cake with the record. See the stories here:

"If cake be the food of love, Eat On!!" wrote Farhan Akhtar in the stories. The picture featured a smiling Akira Akhtar. Akira looked truly happy with her unique and novel cake, which looked tasty and insta-worthy too. On the film front, Farhan Akhtar looks forward to the release of his next film 'Toofan'which is a Rakeysh Omprakash Mehra directorial. The film also has actors Mrunal Thakur and Paresh Rawal alongside Farhan.