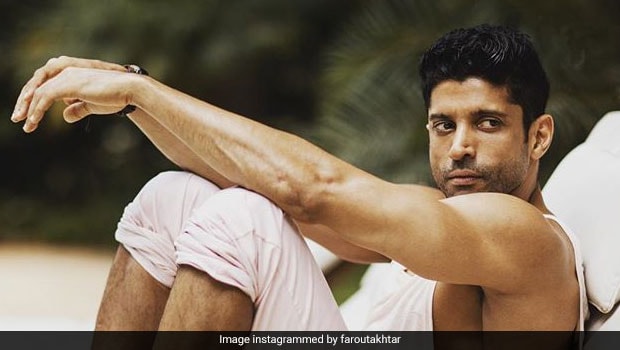 Bollywood actor Farhan Akhtar is one of those versatile artists, who wears multiple hats and carries each one off with aplomb. The handsome actor, who turns 45 on January 9, 2019, is also a director, producer, singer and songwriter and currently has his plate full with work. Akhtar will be seen in The Sky Is Pink next, which also stars Priyanka Chopra, Zara Wassim and Rohit Saraf. Meanwhile, Gully Boy, a film that he co-wrote and that has been directed by his sister Zoya Akhtar, also hits the theatres soon. The actor has proved his mettle in all major areas of film-making, with numerous projects that he has been involved in, have been major commercial hits. The Bhaag Milkha Bhaag actor has also acquired a reputation for defying age with his fit physique and youthful energy.

But Farhan Akhtar's journey to his current Adonis-like looks hasn't been very easy. The actor trains hard and eats clean, in order to appear as fit and fab as he does. His fans were all blown away by his super toned physique in the biopic of the legendary athlete Milkha Singh. Akhtar played the titular role in the film, for which he had to train very hard. Akhtar revealed in a Hindustan Times interview that his prep for the role of Milkha Singh was a turning point for him, in terms of his fitness and diet and he has carried what he learned during the period with him, long after he finished filming for Bhaag Milkha Bhaag.

Farhan Akhtar has a super lean physique, which makes him look young and agile. Akhtar's fitness trainer Samir Jaura revealed in an interview with Times of India that going on a diet means eating balanced meals, rich in the right amounts of protein, fats and carbohydrates. For people who work out regularly, Jaura recommends eating about six or eight meals every day. Jaura also revealed in the interview that the ideal snack before a workout session can be carb-rich sweet potatoes, adding that if someone wants a jacked physique, they should monitor their salt and water intake as well. Jaura prepared Farhan Akhtar for Bhaag Milkha Bhaag, but he trains the actor outside of the shoots as well. Normally as well, Farhan Akhtar is a fan of healthy eating. He revealed in the Hindustan Times interview that he carries a dabba with home-cooked food with him, which usually contains proteins in the form of chicken or fish and healthy carbs in the form of quinoa.

Take a look at how excited he got after spotting an organic food joint in London:

The actor is as committed to his workout regime as he is to a strict and healthy diet. He is known to cycle 22 kilometres every day, apart from a mix of other exercises and workouts. He revealed in an interview with Zoom that he doesn't believe fitness is only about your physique, but it is rather very important for regulating mood and building a positive attitude. "Film-making is a stressful process.. Many things are not under your control. So for that a positive attitude is very crucial", Akhtar told Zoom, adding that just keeping yourself fit can go a long way in helping cope with the stresses of the film-making life. Akhtar has a fondness for volleyball, which he plays thrice a week.

Well, we wish Farhan Akhtar a very happy 45th birthday and hope he continues to inspire us to be the best version of ourselves!