How To Make South Indian-Style Pulao With Coconut Milk - Don't Miss This Recipe! 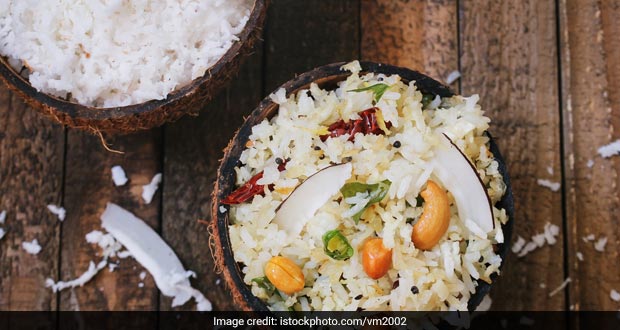 Pulao can give a hard competition to biryani; it might not win the battle but will definitely prove to be a tough one to beat. The veg counterpart of non-veg biryani, pulao is ideal to whet the 'biryani' cravings of non-vegetarians. Punjabi-style pulao - rice cooked with a variety of veggies and spices - is the most popular pulao recipe. But just like biryani, pulao too is made in different versions. Aloo pyaz pulao or just matar pulao, you can experiment in your own way with your own choice of foods. In fact, if you are a fan of south Indian cuisine, you can make south Indian-style pulao too.

Coconut milk is used in many south Indian preperations.

Coconut milk pulao is mixed with onions and tomatoes and a range of spices to add a bang of flavours. Cashew nuts are also added that lend their creamy texture and nutty flavour. This is the perfect recipe for all those times when you don't have time or strength to make a full-fledged Indian meal with sabzis and rotis. Just chop some onions and tomatoes and set out to cook this pulao, which will take about half an hour to prepare. This rice dish is best had during lunch time along with a chutney of your choice.

Click this link to see the complete recipe of Coconut Milk Pulao.

In this quick recipe, you first have to fry sliced onions and tomatoes with cloves, cinnamon, cashew nuts and chopped chillies. Then add rice, coconut milk, some water and salt as per your taste. Let the rice cook and your coconut milk pulao is ready.

See, how easy it is to make this south Indian-style rice dish. Do try this pulao recipe and give those veggie loaded pulao recipes a break.