India's largest orange: The giant orange measures 24 inches in circumference and weighs a whopping 1.425kg as on 23rd November, 2020. 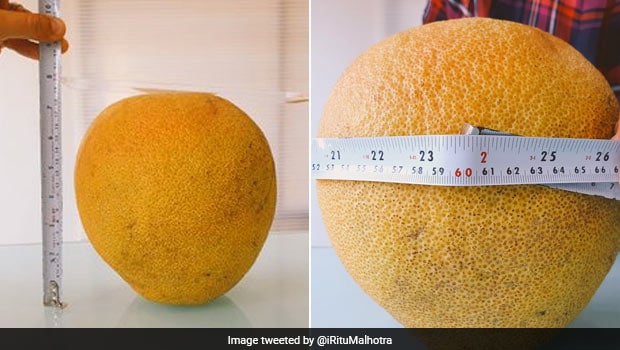 India's largest orange has been found on a farm in Nagpur, Maharashtra.

The internet is a source of information and entertainment for all. We find ourselves endlessly scrolling through our social media feeds, watching cute baby videos or drooling over some amazing food. There is also some amazing content out there which cannot help but surprise you with its unique nature, such as food challenges in which people try their hands at eating the maximum quantity of a certain dish. Another such interesting post on Twitter apparently featured the largest orange by circumference found at a Nagpur farm. Take a look at the tweet here:

Nagpur the orange city, glorified for the abundance production of oranges has found the largest orange by circumference measured 24 inches and height 8 inches with weight 1.425kg on 23 November 2020. The orange grew in my friend's farm. #Orangepic.twitter.com/FrnOEGzMHx

The tweet was shared by entrepreneur Ritu Malhotra, who wrote about how the orange grew at her friend's farm in the city of Nagpur, Maharashtra. The city is known for its orange production, and thus also referred to as the Orange City of India. According to Malhotra's tweet, the giant orange measured 24 inches in circumference and 8 inches in height. Further, the weight of the orange was 1.425kg as on 23rd November, 2020.

The incredibly large orange went viral and got amazing reactions from Twitterati, who couldn't believe their eyes on seeing the huge whopper. Some commented that it was actually looking like a different variety of orange altogether. Others joked that it would be fun to spray the juice from its peels into people's eyes as a prank. Take a look at the responses:

That's fascinating- like these lemons growing in my kitchen garden (with apples for comparision). On a lighter note, i'd say: "You see anything deviant from normal- leave it where you found it. We can try new stuff in 2021, 2020 has seen a lot." ???? pic.twitter.com/6vAiFd1DRV

I am presently eating it pic.twitter.com/sBq07NKzDE

Love oranges and this time of year lucky to be in Nagpur my hometown ????

Promoted
Listen to the latest songs, only on JioSaavn.com
— Ashutosh (@AVDAHIHANDEKAR) November 23, 2020

(Also Read: How Many Jam Donuts Can You Eat In 3 Minutes? UK Woman Breaks World Record)

According to the Guinness World Records, the largest orange by circumference measured 25 inches. This is a record held by Patrick and Joanne Fielder in Fresno, California since the date of 22nd January, 2006. However, this Nagpur orange comes a close second at 24 inches. Let's hope to see the world record being shattered by India soon!