New emojis for 2020 released include food and drinks such as Blueberries, peppers and Olives, Flatbread, Tamale and bubble tea. 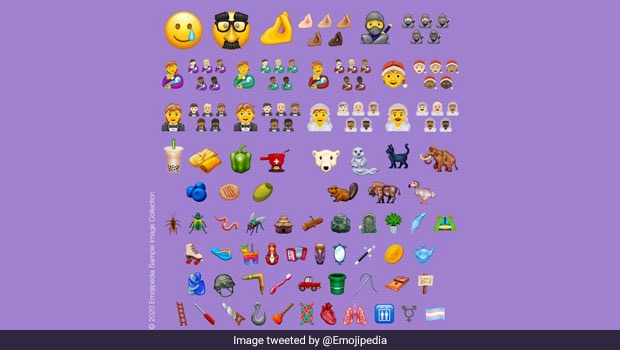 Emojis 2020: Emojis are a great way to converse, and these new emojis are made in foodie heaven.

Emojis communicate things at times that we fail to express in words. And when it comes to emojis, there's always room for more. The inclusion of various skin colours in emojis was an addition in recent years, and the 2020 edition of new emojis shared by the Unicode Consortium moves one step ahead of racial inclusion. There will now be many more gender-inclusive options such as gender-neutral people doing things that are traditionally associated with women or men, such as feeding babies or wearing a white veil. There was also reason to rejoice for foodies all over the world, as some much-loved dishes and ingredients got recognized as emojis.

Blueberries, peppers and olives are a few vegetables and fruits that will soon be made into emojis. Another new emoji that has been added to the list is flatbread, which is served in different ways and is included in different forms in many cuisines across the Middle East, Asia and Africa. Traditional Mexican dish Tamale has also found its way to the emoji hall of fame. It is basically a wrap made with a ground-corn dough and filled with veggies or meat. The Tamale is cooked in a corn husk, which is the outer cover of corn. This is done to maintain its shape. It's usually made steamed in a batch of multiple tamales cooked at once.

Interesting new food emojis that will be coming to phone screens in 2020.

Coming to another regional dish that is wildly popular, Switzerland's cheese fondue has also found itself a place in the emoji hall of fame. The emoji is shown to be in the shape of a red-coloured pan placed atop a flame. The pan has the Swiss cross embossed on top, which is also featured prominently on the Swiss flag.

Apart from the eclectic variety of foods added to the list of 117 emojis, there is one drink that features prominently - the bubble tea. Claimed to have been invented in Taiwan, it has a delicious combination of milk, tea and sugar combined with 'bubble' like ingredients such as tapioca balls or sago pearls. The drink is quite the rage, and adding it to the choice of emojis definitely adds up.

Bubble tea will now be an emoji on your keyboard.

One thing that was truly missed amidst all the new proposed emojis was the dearth of dishes originating from Indian cuisine. Wouldn't we all love to see a delicious butter chicken or paneer tikka or even an idli sambhar on our emoji feed, so we can express our heart's innermost desires without having to even spell out a single word? Year 2020 may have been the year for gender-inclusivity in the emoji world, but we hope Emojipedia and the Unicode Consortium hear our pleas for the next batch of emojis to be developed. Else, desi Twitter should definitely start a campaign for the inclusion of our most-loved Indian dishes!