'Redefine Meat' is an Isreali startup currently making strides in the industry of 3D printing plant-based meats. Take a look at their creations! 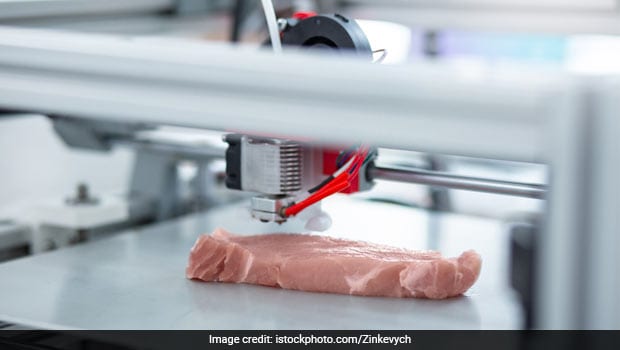 Fancy a vegetarian steak? This company has just what you need!

The consumption of meat has come under criticism in the recent past, due to the rapid spread of the global Coronavirus pandemic. Avid meat consumers are now reconsidering their eating practices, even giving up meat entirely in favour of plant-based diets. 'Mock meats' or plant-based meat alternatives are also steadily increasing their popularity among traditional meat lovers. 'Redefine Meat' is an Isreali startup currently making strides in the industry of 3D printing plant-based meats. They are one of the few pioneers in the alternative meat markets in the world.

(Also Read: Covid-19: 5 Ways The Epidemic Will Change The Way We Eat)

Redefine Meat, an Israeli company based in Tel Aviv, has been around since 2018 and already gained serious headway into the plant-based meat markets. The driving factor behind the company is the fact that the alternative meat industry is growing at a rapid rate, which they hope to use in their favour. Alternative meat sales could reach $140 billion by 2029, about 10% of the world meat market, according to Barclays.

The CEO and co-founder of Redefine Meat, Eshchar Ben Shitrit, also shares his plan for the company and how he hopes to impact issues such as climate change. "We want to work with more and more chefs around the world, more and more big distributors, and we don't see a reason that this cannot be on the table of everybody in every country around the world. This is the biggest problem we face today as humanity and this is the best way to fight climate change, to deliver healthier solutions and food to the entire population of the planet."

The company will first market test its "Alt-Steak" at high-end restaurants this year before rolling out its industrial-scale 3D printers to meat distributors in 2021. "You need a 3D printer to mimic the structure of the muscle of the animal," CEO Eshchar Ben-Shitrit told Reuters. The machines to be launched next year will be able to print 20kg an hour and eventually hundreds, at a lower cost than real meat.

Stacy Pyett, who manages the Proteins for Life programme at Wageningen University & Research in the Netherlands, said 3D printing is one technology competing to improve alternative meat texture, but "having new technologies ... doesn't necessarily solve the flavour and taste problem". "I think that 3D printed meat is a really great idea. A soon as it will be... as soon as the taste will be as good as regular meat I will definitely try it," agreed Doron Zemour, waiter aged 31.