Viral Video: This bowl of soup seems real, but it is actually another dish when you take a closer look. Can you guess what it really is? 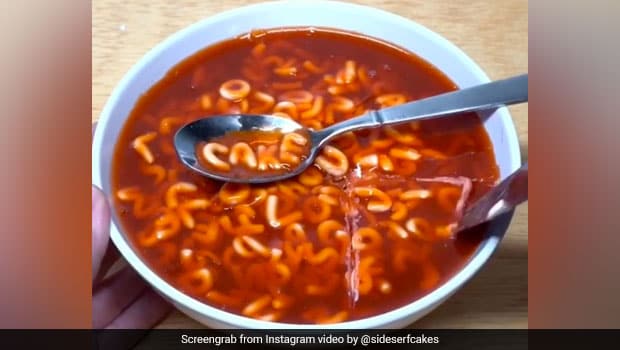 Viral Video: Is it a bowl of soup or something else? Let's see if you can get this right!

This year has seen so many bizarre trends in the food world. There has been no dearth of unique food combinations, which went viral, whether it was the frothy Dalgona coffee or the absurd pairing of chocolate with biryani. From frog bread, island cakes and cloud bread to dessert burgers, food bloggers and chefs have tried their hands at creating some interesting new innovations this year getting mixed reactions. We recently encountered another viral video on the internet which featured an 'Alphabet' Soup.

The Alphabet soup is basically tomato soup with spaghetti shaped in the form of various alphabets. It is a popular dinner meal as it comprises the goodness of soup along with pasta too. However, Instagram user @sideserfcakes took us by surprise with her unique take on the tomato soup which actually turned out to be a hyperreal cake. Take a look:

(Also Read: Fancy A Cake In The Shape Of A Shoe? This Independent Artist Bakes In Surprisingly Eccentric Shapes)

The video garnered 72k views and counting, on Instagram. The Alphabet soup looked extremely realistic, but the catch was that it was actually a hyperreal cake! The video showed the letters 'CAKE' in the spoon of the soup bowl, and once the dish was cut using a knife, it turned out to contain layers and layers of cake inside it.

The soup bowl cake is in keeping with the trend of hyperreal cakes, which has gone viral recently on social media. These cakes are created to look like everyday objects, but on cutting them it turns out that they are actually edible cake. These deceptive cakes are all the rage on the internet, and this soup bowl cake is the latest one to garner attention.

Were you able to guess that the bowl of soup is actually a cake? Tell us in the comments below!