Are we falling back in love with frozen food? 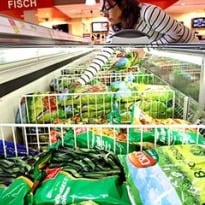 Sales of frozen food have increased and more upmarket options have become available, but suspicion remains

While the Kantar statistics assert that frozen meat, poultry and vegetables showed particular "resilience", there's one inescapable truth when it comes to frozen food - it's a realm taking in an awful lot of disparate, dubious products.

The statistics speak in broad terms, so it's hard to know whether the success is down to sales of podded edamame beans and forest fruit smoothie mixes or ready-made doner kebabs and omelette wedges, but one thing for certain is that Farmfoods is doing something right. Its brand strategy of Len Goodman ambassadorship plus mix-and-match deals - downright astonishing (or worrying, depending on your viewpoint) offers such as 12 salmon fillets, 3kg of chicken or 24 pork chops for £10 - is striking a chord with consumers.

It comes after a rollercoaster few years for frozen food, from high profile campaigns from the likes of Iceland involving Kerry Katona, recalled food, such as Findus lasagnes, to the industry's nightmare scenario, the horsemeat scandal.

However, after clever marketing, a Lidl and Aldi-fuelled demand for budget products and endorsement from chefs, the sector has already bounced back. And there are now upscale versions of Iceland to be found, for instance, Cook, (its tagline "remarkable food for your freezer") a company that so far has had 60 shops pop up around the country, charging £18 for four-portion beef dishes it says are from high quality cuts.

But for the most part, the industry's PR spiel hammers home the budget and waste-free credentials of frozen food. Most of the major specialist retailers, from Iceland to Heron Foods, are aimed at the cost-conscious buyer - and trumpet the "locked-in freshness" of frozen products alongside imagery of allotments, rolling green fields and bobbing fishing boats.

But while it's easy to be sceptical of this, it's no false claim that frozen food is as nutritionally beneficial as fresh. When it comes to frozen vegetables and fruit, they count towards your five-a-day just as effectively, with the British Nutrition Foundation recommending frozen products. Some even say that frozen berries actually benefit flavour-wise from the freezing process. Other interested parties, namely the British Frozen Food Federation (BFFF), say frozen sprouts, carrots and broccoli actually contain more antioxidants (pdf) than their fresh equivalents.

Among the wilder claims made by frozen crusaders are that these products keep languishing pubs alive due to the healthy profit margins, actually help save the environment as freezing native produce involves less air travel and CO2 emissions, and also that they're a lifeline for the demands of mass catering, in schools and hospitals for instance.

Most home and professional freezers contain universally beloved frozen peas, thrifty frozen berries are ideal if you're going to be cooking them anyway, in a crumble or sauce. Frozen broad beans, pastry blocks and white fish can be used to great effect too, and, let's face it, there's a time and place for fish fingers, potato waffles and mini kievs (there, I said it). And while there is still some cynicism (snobbery?) around frozen food, not to mention debate over the "nutrition-obliterating" flash-freezing processes and environmental costs, the industry is unfazed.

Retail journalist Thomas Hobbs from industry magazine The Grocer says that while frozen food does still suffer an image problem, "budget lines are being embraced by the middle classes". He also attributes the success of Farmfoods to the fact that "their product range is quite basic, but they have not over-diversified or compromised on their core strength - selling frozen foods - and that has worked in their favour."

Along with this no-nonsense, no-frills approach, recently there's been some creativity in the aisles, from Iceland's I'm a Celebrity frozen board game to Birds Eye "Mashtags', designed for the Twitter generation.

Brian Young of the BFFF says moving upmarket may help the frozen market further, telling us in recent years there's been a rise in "premium frozen product development, such as frozen herbs and risotto mixes", but it remains to be seen whether this will convince the sceptics and see frozen food fully embraced as tantamount to fresh.

What's your take on frozen food? Are there shop-bought products you can't live without or do you save the freezer space for homemade stock and batch-cooked pies?