Chef's Table: Amrita Raichand Follows Her Heart to a Life in the Culinary World 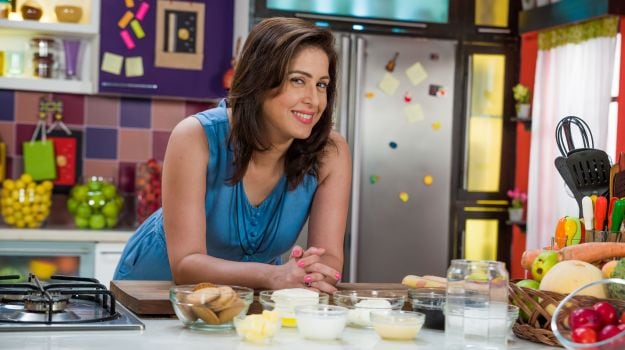 Sometimes you have to stop everything you're doing and start questioning things. Is this the best that you can do? She swapped designer wear for chef’s whites and the glamorous spotlight for the heat in the kitchen, Amrita Raichand shares her journey and talks about her second brilliant career which she never planned to have.

When we meet, she’s preparing for a quick demo at a food festival for kids. Her warm smile will instantly put you at ease. Amrita has been hosting the longest running show on FoodFood, ‘Mummy ka Magic’ for more than five years. But the kitchen life was never her first choice.

For most of the 1990s, she shot major commercial campaigns. She was spotted, aged 19, in college and is remembered as the face of the popular Whirlpool advertisements “I was born in Jamshedpur, a small town and belong to a very conservative family. So, I was happy playing a mommy figures for advertisments. I even took up few character roles in movies but I never aspired to be a star. When I started doing films I felt I was way down the line and realized I’d like to be the best in what I do.  After all, I am a part of this industry where I need to be creatively satisfied.”

Well said. Your life should speak for itself and Amrita’s life tells you that it is never too late to learn. “I always had a panache for cooking. My mother is an amazing cook and I inherited my cooking skills from her. Growing up, I often helped her in the kitchen. When I was eight-years old, I made a full meal for her with Tuvar Dal, Aloo Beans Chokha with Tamatar ki Chutney. That said, I never dreamt of being a chef. In fact, I am a trained Bharatnatayam dancer and wanted to be a professional dancer. You know what they say - when things have to happen, they will happen.”

The turning point in her life was when Chef Sanjeev Kapoor persuaded her to do a cooking show for kids. “He had eaten many meals at my home and knew that I cook. But I never took it seriously. It was because of his persistence that I decided to give it a shot. I think my motherly instincts worked for me and the show was an instant hit. The tag line from the Whirlpool ad – ‘Mummy ka Magic Chalega Kya’ has been lucky for me and so, we decided to use it as the name of the show. It was something that people could relate to, especially mothers. Also, no one was and still isn't doing a show that is centred around kids.”Given the popularity the show has gained, I ask, “How do you feel being an inspiration for all the mothers who cook at home?”.  She laughs, “I'm just a mom who loves to cook. Recently, I was in Amritsar when a bunch of women walked up to me and praised me for ‘Mummy ka Magic’. It was like an eye opener for me. I realized people are taking me seriously in this space and I have a sense of responsibility and I need to give them more in terms of my focus, loyalty and attention.”

And what has inspired her the most? “I get my inspiration from the satisfaction I gain from what I do. I want to establish myself as a great chef and I'm still learning to be one. I'm cooking something new every day to cultivate my culinary side. The more I'm learning, the more I'm getting in awe of it. Last year, I completed an Advanced Culinary Program at Sunrice Global Chef Academy in Singapore and that gave me a new perspective. I discovered the science behind cooking which has made my culinary experience even more challenging and exciting," she shares as we get into a conversation about healthy eating for kids and her aspirations.

1. Have you always had a healthy relationship with food?
I've always been conscious about what I eat. I love my ghar ka khaana which is actually the healthiest. Healthy doesn't necessarily have to be low fat. You can’t live your life counting calories. You need food for your soul too. Whatever food you've eaten all your life will be nourishing for you, so don’t give up on it. Just balance it out and eat the right things. I don’t eat much after 6-7 at night.

2. What’s your secret to making healthy, child-friendly meals?
The first thing is that the food should taste delicious and not bland or boring whatever ingredient you’re using. You also need to pay attention to the presentation. Put your thinking caps on. My son hates oats for breakfast so I made nutty chocolate ladoos with oats, nuts and cinnamon and then coated it with dark chocolate. You cannot compromise on the health factor, so use the hide and seek formula. I also make a vegetarian au-gratin and sneak in some broccoli which he doesn’t like along with carrots and beans. I top it with cheese, make it look like a monster & my job is done.

3. The ingredient you’re currently obsessed with
I’m all for fresh thyme! I made a lovely Italian roast chicken today where I only used olive oil, thyme and lemon. Last night, I made this mushroom soup with white wine and bunged in some fresh thyme that woke up the flavours.

4. What’s the first thing children need to learn about healthy eating?
I was once asked by my son’s school to talk to kids about healthy eating and I figured that most of them didn't even know what vegetables look like. A child doesn't learn from his or her mother's stomach. You have to inculcate certain eating habits. Just the way you teach them everything else. It’s nice to show them whole vegetables and tell the more about them instead of saying just eat it.

Let them discover their palate and decide how they like to eat it. But you can’t be very strict with food but if you are forcing you are not making them happy. You have to use trial and error and serve the same thing in different ways till he likes it. Make meals happy times where you talk about what you are eating, how it was made and ask them if they can guess the flavours.

5. Your worst experience in the kitchen
I keep making mistakes. I have never proclaimed that I am a great cook. The other I made horrible cake donuts. They were very dense but surprisingly everyone loved them! I think it was just their biased love.

6. How do you come up with new recipes? Do you follow the tried and tested approach or experiment?
If I'm making a dish for the first time, I pick up a tried and tested recipe. I look up to Jamie Oliver and Nigella Lawson and often follow their recipes. Having said that, I also love to experiment. Whatever I make for kids I create it completely from scratch. My husband is my guinea pig. I always make him try my dishes. He never had a trained palate earlier but now he has become my best critic.

7. There are not many restaurants in the country that serve child-friendly meals. Do you think we are justifying eating junk food when we step out?

Listen to the latest songs, only on JioSaavn.com
I agree, there are barely any restaurants that focus on kids. No one really pays attention to the health angle as restaurants feel that healthy meals are home meals. If you’re stepping out, you might as well indulge. But that doesn't work for kids.

Sometime back, I created a special Brunch menu for kids at Intercontinental Hotel in Mumbai and everyone loved the concept. On the menu, were 25 fun dishes with a healthy twist. You could have an Angry Bird Pizza where the base was made with ragi flour or go for Water Ball Crackers (pani puri) with pomegranate juice and quinoa. We also had a Tri-Colour Pasta with spinach and carrot puree. The kids loved it. Taking your kids out doesn't mean you have compromise on the health factor. I think the only person that can change this scenario is me (chuckles). You never know I may come up with my own restaurant and hopefully that will be sooner than expected.