How we learned to love the beetroot 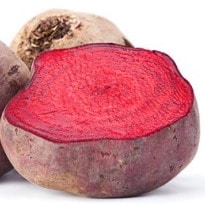 A few years ago, you could only find it drowned in vinegar at the back of your gran's pantry. Now it's the best thing since kale and pomegranates

First it was kale, then cauliflower - now beetroot is the latest veg to enjoy its moment in the sun. It's an unusual place for a root vegetable, I'll admit, but since some clever PR person rebranded it as a superfood sales have soared - retail analysts Kantar claim they're up 20% in the last four years. Quite an achievement for something once confined to a jar of vinegar in your granny's pantry.

Indeed, for the first 13 years of my life, I thought beetroot actually came out of the ground pickled. The first time I tasted it unadulterated by malt vinegar was a shock, if I'm honest - that earthy sweetness proved to be a bit of an acquired taste. But that was the 1990s, a decade of exotic pak choi and fancy sun-dried tomatoes. Only now are we discovering the quieter charms of less showy veg. Not only is beetroot a good source of iron and folic acid, but research has even credited it with "moderate improvements" in amateur athletic performance, thanks to its high levels of nitrate.

These same nitrates have also been linked to a "modest reduction" in blood pressure, according to the NHS website. There is even some evidence to support the idea that a diet high in beetroot juice may increase blood flow to certain areas of the brain, which suggests it may have some application in dementia care, though more research is needed to prove this conclusively.

Such surprising scientific revelations about the boring old beet have dragged it back into the culinary limelight - which means, thankfully, you don't need granny's beetroot sandwiches to get your fix of antioxidants. Not when you've got Riverford's beetroot crisps, Diana Henry's beetroot dauphinoise and Hugh Fearnley-Whittingstall's chocolate and beetroot ice-cream to gorge yourself on.

But beetroot can do sophisticated too; David Everitt-Matthias of the two-starred Le Champignon Sauvage makes sweet bubblegum and beetroot pastilles for his petit fours selection, while Simon Hulstone of Torquay's Michelin-starred The Elephant Bistros sticks it into samosas with goat's curd. It's certainly come a long way from the school salad bar.

Childishly, what I love most about beetroot, however, is its ability to turn almost anything shocking pink, from hummus to meatballs - though the consequences can be a bit scary for the uninitiated. I should know - I nearly had a heart attack the first time I saw the results of casually grating some raw beetroot into the dog's dinner. (Even he's a fan. Though, if the truth be told, he's really not that fussy.)

But much as we both love the stuff, starting the day with a blood-like shot of earthy goodness is still a step too far. Others are clearly less faint-hearted; Tesco's beetroot juice sales have jumped 50% in the past year. Now, add in a slug of horseradish vodka and I might just be convinced ...

Photo: The boring old beet has been dragged back into the culinary limelight. Photograph: Alamy