Packed lunch: the highs and lows of eating al desko 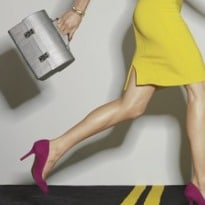 It used to be an egg sandwich and an apple. Now the ingredients have improved, but the ritual remains the same

First, let me take you back. It is 1978. I am in junior school, and we are on a trip to somewhere improving and ancient like York or Fountains Abbey. It's not yet lunchtime and we're still on the M1, but most of the class are already opening their lunchboxes in search of Penguins and Golden Wonder crisps. This, after all, is what children do on school trips. This, in fact, is the entire point of school trips, canteen dinners being so very disgusting, York Minster being so very boring. What, I wonder, will be in mine? A Blue Riband? A Breakaway? A small bag - for a moment, I dare to dream - of Iced Gems?

Slowly, carefully, I peel back the Tupperware lid of my small lunchbox ... Oh no. I smell it immediately: the drab, hoofy stink of hard-boiled egg. I quickly shove the lid back on, but it's already too late. The whiff has risen; I am a marked child. Five seconds later, the cry goes up: "Ugh!" yell 30 eight-year-olds with one voice. "That stinks! It's disgusting! What a pong!" How ever am I going to eat my lunch? I've no idea, for I dare not open the box again. The opprobrium is too much. If, by some miracle, a bag of Iced Gems is loitering cosily between my egg sandwiches and the inevitable apple, there it will simply have to stay until I'm safely back inside my mother's Datsun.

Even now, I wince at this episode. But in a way it was a good thing. It prepared me for what lay ahead - for packed lunches are a vexed issue. When you're a child, you long to eat rubbish - pickled onion flavour Monster Munch, preferably - and should you have the kind of parent who sends you off on a day out (as mine used to) with something wholesome, health-enhancing and irredeemably dreary (a raw carrot, say, or a doll-sized box of Sun-Maid raisins) you will inevitably feel miserable and left out. But when you're an adult, things are hardly easier. Sure, you want both to save money and to avoid the horrible chill cabinet mouth feel of Pret and all the rest. However, you must proceed with caution. A plastic tub containing a solid wedge of last night's lasagne is going to make you feel sad and look stingy, while one containing anything too smelly or messy is going to leave your co-workers feeling queasy, not to say repulsed. There's nothing worse than the sight of the person forking hummus-drenched chicken into their mouth while reading the latest Grazia. As for the idea of a delicious and smile-inducing packed lunch, well, this is the impossible dream. How to make a dish that will travel successfully? How to make one that can endure some time outside a fridge? How to avoid eating the same thing - cheese and sodding Branston - every single day?

It's important to get it right - or at least to try. For we can all measure out our lives in packed lunches. The ones I remember most fondly are the ones I gave away. At school in Israel, I used to swap my chocolate wafer for za'atar-covered flatbread; my friend Sami was the recipient of the wafer because he could zip down the road for bread any time he liked, whereas I was forbidden to go beyond the school gates. Plus, he preferred wafers, za'atar being as ordinary to him as it was exotic to me. Walking in the Lake District with my father, we used to take with us a lunch packed by the Wasdale Head hotel. He was sniffy about these little brown paper packages, but I thought them the greatest treat ever: I always chose Sandwich Spread, a delicacy unknown at home. (For him: corned beef.)

I remember vividly the first sandwich I ever ate in London: mashed avocado and bacon on rye bread. I thought this a quite incredible combination and ate it every lunchtime for about a month. At my first newspaper, where the shifts seemed to be 24 hours long, I would buy a smoked salmon and cream cheese bagel from a boy who arrived with a large basket of the things every morning at 9.30. Until then, smoked salmon had for me been a delicacy reserved for Christmas. A few years later, sushi arrived on the scene. Picking at it with my disposable chopsticks, I used to feel so amazingly sophisticated - as if I were in New York (or Cagney and Lacey).

These days, I work at home, and while I don't wrap my lunch in greaseproof paper, I do transport it up two flights of stairs, from kitchen to desk. Such rituals are important. When I make the effort to assemble something delicious and properly thought out, I feel better about myself. In turn, I feel better about my work. It's a small thing, a packed lunch. But it's also an important thing - with or without Iced Gems.

Photo: 'We can measure out our lives in packed lunches'. Photograph: Adrianna Williams/Getty Images