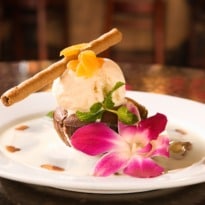 There's no getting around it, Indians have a (very) sweet tooth. In fact, the early visitors to India called it the land of sweets.

This sweet love has roots that reach back to the Indian mythology. Lord Krishna's Makhan-Mishri, Ganesha's Modak and the famous boondi ladoos and halwa offered as prasad in temples, that's how Indian desserts embraced a sacred status. Their journey began from religious ceremonies and they went on to grace festivals and celebrations making their way straight into every Indian's heart.

The 19th century Renaissance saw a sudden surge of the iconic halwai or mithai shops, especially in West Bengal. Most of the essentially Indian desserts featured smooth and silky blends of milk and its other varieties like chenna, khoya and cream sweetened with jaggery or honey. Ever since, the great Indian mithais have evolved with time and tradition.

In modern kitchens, chefs are putting their creativity to the test, experimenting with ingredients, marrying flavours and presenting fusion Indian desserts like never before.


Kulfis break out of the mould

The classic creaminess of kulfi takes on a variety of bold flavours like gulab, pomegranate, kesar and chikoo. The 'paan kulfi' is a complete show stealer and has hogged the top spot on most dinner party menus. Sorbet-like flavours, jamun and kala khatta are a good depart from the usual.

Bite into this latest trend with the best of our flavoured kulfis. From our specialist chefs, comes guava and chooran kulfi, kaju katli kulfi and lassi kulfi.

Trio of Kulfis by Chef Manish Mehrotra and Muhammad Ikram


Fruity is the flavour of the season

While last year chocolate reined the dessert menu, this year is all about going fruity. Our old favourites get a fruity makeover. One of our top chefs, Marut Sikka creates a shahi tukda layered with pineapple rounds. That with fresh strawberries has also gathered many fans.

Look out for the apple jalebi that has been making a starry appearance in many a gathering. Better still; learn how to make it at home with Chef Ajay Chopra's gourmet recipe. Battered apple rings are fried crisp and then dipped in a fragrant rose syrup. Mmm...

Apple Kheer by Chef Aditya Bal
Apple Jalebi by Chef Ajay Chopra
Kalakand, barfis and sandesh have been given a new look with kiwi, cranberry and other exotic fruits that add a touch of festive colour. Ginger and pineapple halwas are also making cash registers ring.

Fusion is the new chic. We're talking about show-stopper desserts, ones that hold a sweet surprise and make you marvel at the creativity. The trend is timely, given the affinity and access to global tastes. Jalebi Caviar, Mithai Cheesecake, Gulukand Cupcakes and Pistachio Panna Cottasare some of the masterpieces.

We're all known to the good old anjeer ki barfi. I love figs for their versatility; they can make any dessert come alive. From ice creams, cheesecakes and mithai mousse to fig rolls and halwa, there's a lot to look forward to.

Darling desserts like mini gulab jamun, rasmalai and malpuas will make you go 'aww'! You'll find dessert buffets decked with a mosaic of miniatures that you can devour in one bite. Seviyaan served in tiny shot glasses took my heart away. Some of them are even served in edible cups. With rising food costs and people becoming more calorie conscious, this trend definitely has an appetite for growth.

Desserts-in-a-jar are all the rage! Some desserts just aren't for sharing and for those you have mithai jars. Quite recently, I found myself digging into a three-layer shahi boondi in a jar.
Image via Pinterest/ Glorious Treats

Promoted
Listen to the latest songs, only on JioSaavn.com
Molecular desserts

Molecular desserts are pure genius. Familiar flavours are carefully crafted along with modern science. As diners get more adventurous, so do the chefs. Nitrogen phirni, bubbling kulfis and jalebis garnished with flavoured foam can spin your head around with tastes that are truly wild.

CommentsIf you've come across a dessert that I should save space for, don't forget to share.