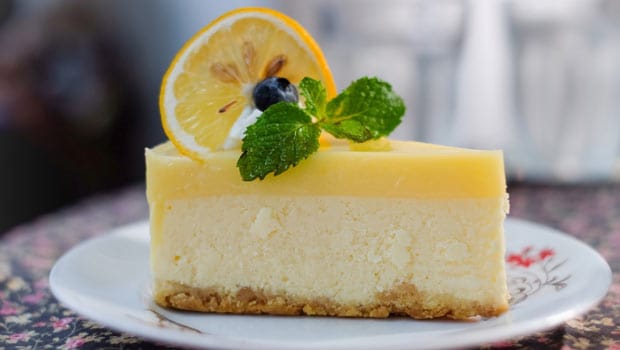 How to make Lemon Cheesecake

About Lemon Cheesecake Recipe: A decadent cheesecake recipe that you can now try at home during the festive season!

How to Make Lemon Cheesecake

HideShow Media
1.
Preheat the oven to 167°C.
2.
On a baking sheet place a sheet of aluminum foil large enough to wrap around the outside of the spring form pan. Set it aside.
3.
To make the crust, place the cookies into the bowl of a food processor and process until you get fine, even crumbs.
4.
Mix the cookie crumbs with the melted butter, sugar, and kosher salt until you get the consistency of wet sand, and the mixture clumps together when squeezed in the palm of your hand.
5.
Press the crust mixture into the bottom of a 10-inch springform pan in an even layer. You can either keep the crust layer only on the bottom, or on the bottom and pressed up against the sides. It is totally up to you!
6.
Bake for 15 minutes. Remove from the oven and set on a cooling rack while you prepare the cheesecake filling.
7.
Place a baking dish on the lower rack of the oven and fill with boiling water; this will create a steamy environment for the cheesecake to bake.
8.
In the bowl of a stand mixer beat the cream cheese until smooth and creamy, scraping the sides of the bowl a few times so there are no lumps of firm cream cheese. Beat in the sugar, lemon zest, and salt, then scrape down the sides.
9.
Beat in the eggs one at a time, mixing until each egg is combined and scraping down the sides and bottom of the bowl after each addition.
10.
Resist the urge to whip the mixture too much; just beat in each egg until mixed well - over-beating can pull too much air into the batter, resulting in a cracked cheesecake.
11.
On low speed, beat in the sour cream until just combined. Spread the cheesecake filling into the pre-baked crust. Put the cheesecake onto the foil-lined baking sheet. Press the foil up and around the outside of the springform pan.
12.
Place the baking sheet with the cheesecake on it, on the center rack of the oven, above the pan of hot water, for 1 hour or until the cheesecake appears set and dry on top but still jiggles in the center like jello.
13.
Turn off the oven and allow the cheesecake to cool for 60 minutes with the oven door closed.
14.
Crack open the oven door (place a wooden spoon between the door and the frame of the oven to keep it just cracked) and allow the cheesecake to cool for an additional 45 minutes before removing from the oven to cool on a baking rack, until it reaches room temperature.
15.
The cheesecake may have domed slightly while baking but should deflate to a flat top with a small ridge around the edge, as it slowly cools.
16.
Remove the foil once the cheesecake has cooled to room temperature (anytime after the cheesecake has pulled away from the edges of the pan and it's cool enough to handle).
17.
Once the cheesecake is at room temperature, transfer it to the refrigerator to chill for at least 6 hours before serving. To create the petal pattern as shown in the photos, pipe or dollop small blobs of curd in a ring around the perimeter of the cheesecake, leaving about 1/2-inch border.
18.
Using an offset spatula or the back of a teaspoon, gently smash and drag the blobs toward the center of the cheesecake.