10 Coolest New Restaurants in Mumbai That Opened in 2017 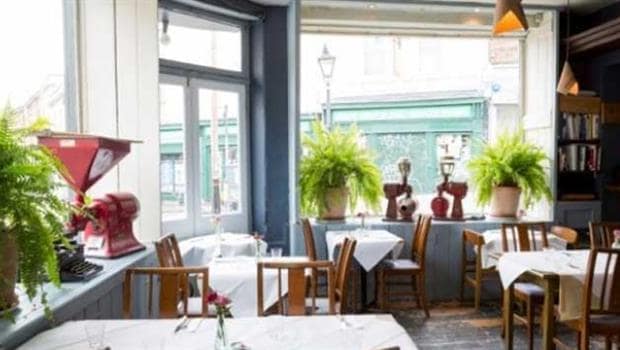 Highlights
Mumbai is no slouch when it comes to restaurants — not a week goes by that a restaurant doesn't open in some corner of the metropolis. This year though, seems to have seen an extraordinary surge of new dining options, everything from old-fashioned Chinese to contemporary fusion, many of which are located in the area du jour - Bandra Kurla Complex (BKC). Now that we are half way through the year, we take a look at a few of them.

Slink & Bardot offers a menu of mostly French dishes, mixing plates of classics (Steak au Poivre) with contemporaries (Citrus-Cured Gravlax), along with a few idiosyncratic insertions, such as the Caesar Salad. I could tell you about its seductive interiors, or its intriguing cocktail list. Instead, I will tell you about the food: Gratin Dauphinois, in which the potato is infiltrated with brie and garlicky cream; melting, slow-cooked pork belly rounded out with an emmental croquette and a sweet potato mash; the Brie en Croute propped up by filo pastry. And finally, the satisfyingly familiar dark chocolate tartelette.

Japanese food is slowly seeping its way to popularity in Mumbai, thanks to restaurants like Hello Guppy. Its decor feels like an infiltration of kawaii Japan in Mumbai's BKC — it's all pikachu and pachinko, manga and kamon here. The menu brings Japanese heritage to the table, with Chashu Ramen, Takikomi rice, and Chicken Katsu, among others. But Hello Guppy also bends its knee to contemporary shenanigans such as the ramen burger, that has inexplicably swept the Western world.

Thank you @elledecor_india. We loved having you over! #repost If you're craving a slice of #Japan, we suggest you instantly pack your bags and head out to @helloguppy, renowned restaurateur @adsingholive's newest venture in BKC. We simply love the authentic Japanese twist given to it by designer Anshu Arora (@anshu73)! Our recommendation? Try their mouth wateringly delicious Mushroom soup. #NewOpening #NewRestaurantAlert #JapaneseFood #craving #Bandra #BKC #eatery #popart #anime #colour

At Toast & Tonic, popular Bengaluru chef Manu Chandra has plucked and parsed and put together elements from around on the world on his menu. Thus, we find soft shell crab from Bhimavaram evoking Singaporean flavours, bajra and ricotta gnudi jostling with tuna tataki, and Naga chilli chicken wings soothed with som tam salad on the side.

Shizusan is a bright, bustling Asian shophouse-style eatery, with a menu that offers a boggling amount of choice; everything from ramen to sushi to sashimi to baos to dim sum to curries and salads and soups. I suggest that you don't scarper before trying the pillowy baos, the Sichuan specialty of dan dan mian (skeins of noodles in a bath of darkly fragrant soup), and the Sumatran rendang. Then work off all those calories with a saunter around the surrounding shops.

At Hemant Oberoi, you'll find a few dishes harking back to Oberoi's glorious menu at Zodiac Grill, except that these are coloured with Peruvian, Asian and Mediterranean influences. Expect dishes such as the brie and truffle soufflé, an uptick from the Grill's famous Camembert Dariole. But you'll also find curious new plates such as kolokithakia and the much-vaunted chocolate shawarma.

The menu at Kuai Kitchen is generic enough to belong to any standard Chinese eatery around the city, but that doesn't mean you should scamper off without a taste. The food here speaks to classic Chinese food that most of us grew up eating — crispy wontons, tom yum soup, chop suey, and hakka noodles. Kuai Kitchen comes of Royal China lineage however, and so you can also be assured of the excellent quality of the dim sum.

Gymkhana 91 is a messy pastiche of colonial styling — Victorian arches, patterned tiled flooring, and the like. There's nothing particularly English about the food though, as the menu veers from Parsi patra ni macchi and seekh parotha to penne Alfredo and sushi. The cocktails are more intriguing; try the East Indian gimlet and the Mekong, with its accents of coconut and pineapple.

Don't be put off by TAG's puzzling moniker. Chef Brar cooks his globe-trotting vegetarian dishes with exuberance; laksa with a smidgen of chia seeds, a whimsical papdi chaat with kale fritters, palm hearts (and jackfruit) folded into an Awadhi biryani. You won't miss the meat for a minute. It doesn't hurt that Brar's dishes are eminently Instagram-worthy — at mealtimes, there's always a flash or two going off on neighbouring tables.

The second progeny of Royal China, Jia owes as much to Chinese kitchens as it does to Japan, and Thai ones; it describes itself as a 'modern oriental kitchen, serving dim sum, Japanese, Thai, and modern Chinese dishes. The bulbous dumplings are delightful — perfectly seasoned, the skin stretched thin, the chicken and seafood core plump and firm. The crisp squares of the fried turnip cake are consistently airy and well-executed, and the tom yum soup is brothy, balanced, and hearty. Thankfully, the restaurant eschews the stagy, faux Chinese decor that used to be so popular in Mumbai, and sticks with gleaming gold and white accents.

Wilting under the heat of a scorching Mumbai summer, there's little more I crave than salads and smoothies. At Craving Salad, I can sate both those longings with one fell stroke. As the name suggests, this is where the salad takes centre stage, although you won't get the ubiquitous Caesar / Caprese salads that are plastered on most restaurant menus of the city. Instead, you'll find Cobb salad with an Asian twist, a Caprese salad with avocado and tofu (sacrilege?), taco salad and a minty quinoa salad. These don't reinvent the wheel, but are cheerful, familiar and satisfying.