Eating With Your Hands and Other Indian Food Traditions 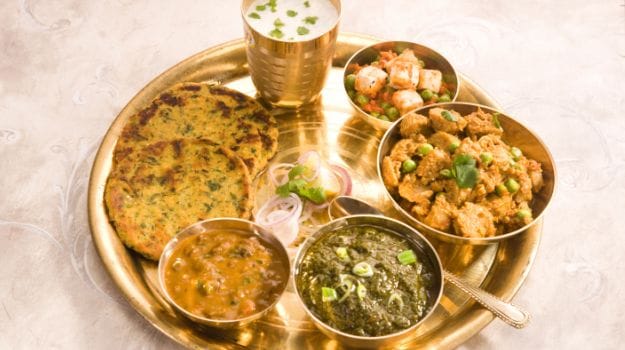 Americans love a loaded Thanksgiving table, Chinese can’t do without chopsticks, Britons have formal dining traditions and the rest of the world has its own - different cultures, cuisines and customs. With a rich heritage, the history of Indian cuisine is as old as our civilization. The Indian dinning etiquette is built on traditions. And behind almost every tradition are centuries of invasions, conquests, religious beliefs, political changes and social customs.

People from the Indus valley cooked with wild grains, herbs and plants. Most of them are staples today. The Mughals saw food as an art and made us familiar with the fragrance of rose water, the texture of yoghurt and desi ghee, and the use of spices. They showed us that eating is meant to be pleasurable. The Chinese introduced the tradition of tea, Portuguese made red chilli popular and from the British we borrowed the dinner decorum of being conservative.

More interesting is how traditions have come into shape, evolved and transformed over time. They primarily vary by region and religion. In a land of numerous rituals, the act of offering food to deities gave birth to many traditions. The prasadsam served at temples, the langar at Gurudwaras or the lavish Iftar meals are a reflection of our diverse ethnicity. These traditions made their way into our kitchens and influenced how we regard food – sacred and pure. For instance, in some cultures a prayer of thanks comes first and then you reach out for food with your hand.

Eating is an elaborate ritual and certain traditions create our cultural identity. Here’s exploring some ancient food traditions that form the basis of our culinary reputation and have left a significant mark on our multicultural cuisine.

(Looks as Good as it Tastes? Why an Attractive Plate Makes for a Tastier Dinner)

Eating with Your Hands

This tradition has its roots in Ayurveda. Eating is supposed to be a sensory experience and eating with your hands evokes emotion and passion. According to Vedic wisdom, the hands are the most precious organs of action. One of the Ayurvedic texts reveals, every finger is an extension of the five elements. Through the thumb comes space, with the forefinger comes air, the middle finger is fire, the ring finer is water and the little finger represents earth.

Eating with your fingers stimulates these five elements and helps in bringing forth digestive juices in the stomach. The nerve endings on your fingertips are known to stimulate digestion. Feeling your food becomes a way of signaling the stomach that you are about to eat. You become more conscious of the taste, textures and aromas. Besides India, it is also common in some parts of Africa and the Middle East.

(Flavour Boosters: 5 Ayurvedic Herbs We Must Have in Our Kitchen)

An authentic Southern meal is mostly served on a banana leaf, especially in Kerala. Eating food on a banana leaf is considered healthy. Placing hot food on these leaves emanates several nutrients that enrich your food. Banana leaves contain large amounts of polyphenols; a natural antioxidant found in many plant-based foods. It also adds to the aroma of food and enhances the taste. Traditionally, water is sprinkled on the banana leaves before use as an act of purification.

The use of banana leaves dates back to a time before metal became mainstay. People found it more hygienic to use fresh leaves that were disposable instead of wooden utensils. Several Hindu temples used lotus leaves to serve Prasad as the flower is considered scared and pure. But they were not big enough for a meal. Banana leaves, on the other hand, were abundant, big, thick and not perforated. They could easily carry dishes like curries or chutneys. Moreover, sitting on the floor and eating was recommended as the repeated bending of the spine was known to improve blood circulation.

One Plate for All

The Bohri Muslim community follows a tradition of eating from one huge platter called the thal. The meal begins by sitting around the platter and passing the salt. After every family member has tasted it, the first course is served. The entire family eats out of the same platter which should never be left unattended after the meal has been placed. Every dish sits in center of the thal and the members pull out their share. There should be no leftovers at the end of the meal and therefore, the portions are just right for every member.  Interestingly, the first course is usually a dessert and a meat appetiser follows. It is considered auspicious to start their meal with a sweet dish.

(The City of Nawabs: An Extravagant Iftar Trail in Lucknow)

Wazwan is not a meal. It’s a ceremony. It’s a foodie’s pilgrimage to discover the royal cuisine and culture of Kashmir. It is believed that it originated sometime during the 15th century when Timur’s invasion brought many craftsmen, weavers, architects and cooks into the Kashmir valley. The descendants of these cooks have been carrying forward the legacy. In Kashmiri language, ‘waz’ means a highly skilled cook and ‘wan’ refers to shop.

Traditionally, it consists of 36 courses and each of them takes you back in time. The meal begins with the ritual of washing hands. Attendants carry Tasht-Nari (a type of vessel) around for your convenience. The meal is served in four groups. Heaps of fragrant rice, tender kebabs and delicately spiced curries are beautifully placed in carved platters called 'taramis’. Some dishes are left to cook overnight that lends the memorable taste. The complexity and variety of food is not to be matched elsewhere. The meal ends on a sweet note with Phirni along with Kahwa; a  green tea flavoured with spices and slivered almonds.

A tradition followed across Bengal and Assam, jol pan is a quick snack that is often eaten before breakfast. In some cultures, it is a mix of different varieties of regional rice cooked traditionally and served with curd, jaggery and pitha. Pitha is a type of rice cake, pan-fried on the hot griddle. It is offered to guests and at weddings and special occasions. In a humid land, your body's ability to fight disease depends on the diet. Thus, curd with its cooling properties acts as a great reliever. Jol pan is also accompanied with a steaming cup of tea.

Promoted
Listen to the latest songs, only on JioSaavn.com
The Great Indian Thalis

(The World on a Plate: 8 Must-Visit Restaurants in Chennai)

The thali is a wholesome meal which you would find in many regions like Rajasthan, Gujarat or down South, complete with light and lovely curries, local greens, dals, rice and Indian breads. Accompaniments like homemade chutneys, pickles and crisp papadums are a must. It defines the system of Indian meals prepared and eaten in most households across the country.

CommentsThe beauty of the thali is that while it’s a significant part of our culture, it offers a scientific approach to nutrition. If you look at any of them, they represent the food pyramid of today with carbohydrates from grains, fibre from fruits and vegetables and nutrients from dairy products like yoghurt. It’s a balanced diet where variety is at its best.