A bourbon-rye blend, you say? 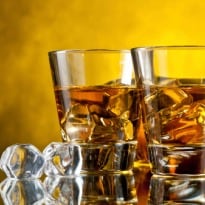 In 2009, when he released Bourye, his oddball blend of bourbon and rye whiskeys, David Perkins, the founder of High West Distillery in Utah, decided to protect his ownership of the term even though, he says, he thought the name kind of dumb.

"I'm glad I trademarked Bourye," he said recently. "It's become a cult favorite."

It also now enjoys the status of forerunner. After years of being a quirky loner, Bourye has been joined this fall in liquor stores by two other bourbon-rye blends: Forgiven, made by the Kentucky distilling giant Wild Turkey, and Jefferson's Chef's Celebration, the work of Jefferson's Bourbon, a well-respected Kentucky producer that buys whiskey from other producers to bottle under its own name.

In the worlds of Scotch and Canadian whisky, blends are commonplace and commercially dominant. In the realm of American bourbon and rye, where the adjective straight is wielded with pride, they are lesser players that rarely receive the spotlight. Perkins, perhaps realizing this, calls Bourye a jackalope of a whiskey, after the mythical jackrabbit-antelope hybrid of American folklore - a beast that can be caught, it is said, only with whiskey.

Corn, the dominant grain used in bourbon, and rye frequently find themselves mates in a bourbon's blend of grains, known in the industry as a mash bill. But once a straight bourbon or straight rye whiskey is distilled, the liquors tend to keep to themselves. (None of the new whiskeys mentioned here, by the way, contain grain whiskey, a component in most whiskeys that are called blends.)

With bourbon and rye immensely popular on their own, why tamper with success by throwing them together?

What these blends deliver in flavor that a bourbon with a pronounced rye content wouldn't furnish seems to come down to subtleties.

"You get a lot more fruit flavors coming out than in any high-rye bourbons," said Trey Zoeller, the founder of Jefferson's.

Russell, too, believes that the blending process tames the feisty rye a bit.

"What I think the difference is, is getting the bourbon out front with the rye in back," he said. "Bourbon with a high-rye mash can get really spicy."

Perkins said that when he invented Bourye, he had no idea who would buy it.

"We don't have a big market-research department," he said. "But I can tell you the distributors bought it everywhere."

Bourye sold out quickly and was replaced in 2011 with Son of Bourye, which is made with younger whiskeys.

Chuck Cowdery, a journalist and authority on American whiskey, sees some promise in these novel combinations.

Promoted
Listen to the latest songs, only on JioSaavn.com
"All-whiskey blends are a nod to the Scotch tradition and can produce some interesting drinks," he said. But, he added, "Overall, I think the producers are driven to make news and get attention."