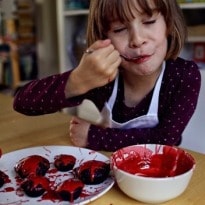 Pigs' blood can replace eggs in sweet dishes, according to the Nordic Food Lab. What better time to try the recipes than Halloween?

There is an amazing amount of Halloween shizzle in the shops right now. Mr Kipling's Fiendish Fancies and McVitie's Lemon & Slime and Spooky Jaffa Cake bars are joining supermarket own-brand versions of ghoulish, freaky and ghostly edible treats. But while this is great news for lazy hosts, any Halloween party worthy of the name deserves something more. It deserves blood.

Back in January, in a report that British bakers have shamefully ignored, the Copenhagen-based Nordic Food Lab explained how pigs' blood can replace eggs in sweet dishes. Both ingredients, it pointed out, contain a similar mix of proteins, and both will coagulate when heated. This was great news, it declared, for all those suffering from egg-white intolerance.

The accompanying recipes ranged from pigs' blood ice-cream to pigs' blood pancakes. "We are always searching for deliciousness in the ignored and overlooked," the NFL explained.

I duly made the pig's blood meringues, although the only way I could get them to stiffen was by including some old-fashioned egg white. They were disgusting - a little chewy, very sugary and distressingly just-picked-a-scab-and-now-trying-to-stop-the-oozing-with-your-mouthy. Still, the pigs' blood chocolate cake seemed worth a try. "Cake-making is in my blood," the NFL's Elisabeth Paul insisted, emphasising her rigorous approach to taste-testing. "I made two half-cakes: one with blood, the other a chocolate control. Both were delicious."

So, a few days ago I found myself up to my elbows in haemoglobin alongside my girlfriend's young daughters. This was either going to be the funnest cookery session ever, I told their mother, or literally a bloody disaster.

Where does one get pigs' blood? Paul got hers fresh from the Grambogård slaughterhouse, whose motto is: "Happy animals are tasty animals." In Britain, however, fresh pigs' blood is almost impossible to obtain unless you have a friend at a slaughterhouse. It clots quickly, so it doesn't travel well, and most abattoirs don't want to deal with the stiff regulations governing testing and transport. I had to make do with dried blood, which is readily available by mail order. But this is one time when amateurs are on the same footing as professionals: almost all commercially produced black pudding, for example, is made with dried blood.

Paul's recipe was for chocolate sponge cake, which she recommends as the basis for "blood forest gateau". But that sounded a bit involved for cooking with kids, so I decided to make fairy cakes instead, adapting a recipe from that culinary authority Dr Oetker. I combined 110g of butter with the same weight of caster sugar, 75g of self-raising flour, 25g of cocoa powder and two medium eggs - or rather, 130g of pigs' blood. According to the NFL, 65g of blood will do the work of one medium egg, while 43g of blood can stand in for an egg white. (To put it another way, since a slaughtered pig yields between 2.25kg and 4.5kg of blood, a single porker can replace three to six dozen eggs. And, come to think of it, you can get bacon, sausages and egg substitutes from the same animal. Isn't nature wonderful?)

First, of course, you have to rehydrate your blood, adding 45g of water to each 20g of pig extract. As I am weighing everything, six-year-old Alice sticks her face close to the dried blood. It has arrived in a plastic bag, a fine purpley-black powder that smells faintly like ... "Salmon!" she suggests. "Where does it come from?"

"Well," I begin, hoping the truth won't bring our experiment to an abrupt end, "when you kill a pig, first you stun it so it doesn't feel anything, then you 'stick' it, so the blood comes out and doesn't spoil the meat. You take a special knife and you cut its thr-."

"Can I touch it?" she interrupts, thrusting her fingers into the powder.

A few minutes later, she and her sister are whisking the blood together with the butter, sugar and flour. They have never taken such an interest in cooking. As the NFL puts it, "there is a childlike joy in experimentation". The only glitch comes when three-year-old Florence gets overexcited and sends brown gloop flying in all directions. "It's a blood volcano!" Alice declares happily as I sponge down the table. And then they get on with filling the baking tray, first with a spoon, then with their fingers. I have to keep reminding them not to lick them.

The finished cakes are lovely. They're a bit dry, but that's probably because I've cooked them for too long; blood needs less heat to set than eggs. Still, for obvious reasons I'd rather the cakes didn't have gooey centres. There is just the faintest whiff of fish, and some tiny lumps that the uncharitable might describe as clots. But, on the whole, they look and taste surprisingly like normal homemade chocolate cakes. The girls can't get enough of them, especially once we add some red fondant icing to make them look suitably gory.

The only holdout is their mother, who isn't persuaded that blood has any place in baking and won't unbend enough to take a single mouthful. Nor will she try the delicious fresh pasta I make a few days later, again replacing the traditional eggs with something that once flowed through the veins of a pig. But that's her loss.

If you're feeling brave, there's still time to make your own blood cakes before the trick-or-treaters start their rounds, if you order the blood now. Go on - I dare you.