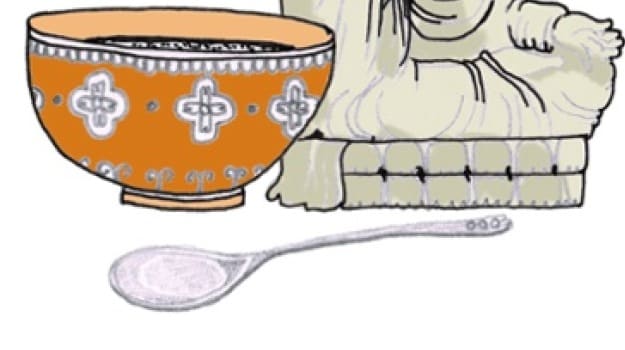 The Tibetan holy man starts his day with roasted barley mixed with tea and yak's milk. Yaks may be hard to find in the UK, but it's still a dish you can recreate at home

Tsampa is a type of flour made from ground, roasted barley. It's eaten in dozens of ways as part of the Tibetan diet, including, as the Dalai Lama does, at breakfast, which he has at 5.30am. Traditionally, the nutty flour is mixed with tea and the rich, fermented, sometimes slightly cheesy butter from yak's milk. You can buy tsampa from tsampa.co.uk.

Those new to tsampa might prefer to try it first in a porridge made with milk: mix 250ml hot milk with a teaspoon of butter and six tablespoons of tsampa, or more, if you prefer it thicker, plus a teaspoon of brown sugar or honey. Alternatively, mix 250ml hot, strong black tea with a teaspoon of butter and six tablespoons (or more) of tsampa, plus a pinch of salt. In Tibet, tsampa is often eaten far drier than this, using just the dregs of the tea to wet the flour and make it into a dumpling.