Cooking to Music: Why Chefs Listen to Heavy Metal 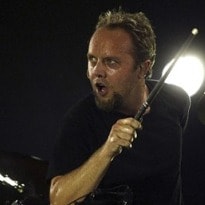 Top chefs listen to Metallica in the run-up to service - except Jamie Oliver, who prefers Westlife. What gets your toes tapping while your fingers are chopping?

When it was announced that Lars from Metallica was writing the foreword for René Redzepi's forthcoming book, one commentator tweeted: "Presumably the publishers struggled to think of another famous Dane." In fact, the reason why the Noma boss asked the drummer to help rather than, say, Michael Laudrup, Sofie Gråbøl or Whigfield, is because he's genuinely a big fan of the band. He recently revealed that he makes his kitchen staff listen to their music while they're shaving cod liver, making "hazelnut soil" or doing all the other repetitive jobs that go into creating one of the world's most celebrated restaurants.

Some sensitive chefs might feel that this is a kind of weird test of character, rather like Ferran Adrià having his "stagiaires" clean the stones in El Bulli's car park. If you can put up with your boss playing air guitar to Ride the Lightning while you work, then perhaps you've got what it takes to make a two-Michelin-starred meal out of a bit of lichen and some drowsy ants.

It turns out, though, that a liking for full-blooded rock, metal and punk is pretty common in high-end restaurants. When the guests arrive it might all be silent concentration in the kitchen and light classical in the dining room but, an hour or two before, many of the best chefs have Killed by Death blasting out.

David Philpot of Paternoster Chop House, for example, also sticks Metallica on the stereo, along with Nine Inch Nails, Green Day and Stray Cats, and he says that he has employed a lot of chefs who are similar, in appearance at least, to rock stars. "On opening one restaurant with an open kitchen, a very well-spoken lady said to me: 'I notice all your staff are either tattooed or pierced or both, is that mandatory?' I laughed, saying: 'Yes, madam, it shows there's something artistic in them.'"

Simon Rogan from L'Enclume says that "American rock" gets his kitchen going, as well as techno, while Cornwall's Nathan Outlaw is evangelical about the connection between music and cooking. "It's a calming influence in a situation that can be extremely fraught and stressful," he says. "It keeps spirits up and can help with the monotony of repetitive tasks. The tempo is important. In the afternoon, in the run-up to service, it needs to be upbeat to keep everyone going. We get told off by the hotel manager when we're playing Rage Against the Machine or System of a Down too loud!"

The more you think about this, the more sense it makes. Another recent tweet from Redzepi, "We cracked some lamb skulls today", along with a picture of succulent brains, could easily have been from some banned Scandinavian black metal outfit. Equally, the super-fast knife skills of professional chefs involve hand movements that are highly reminiscent of a metal guitarist's "shredding". It seems that being a Michelin-starred chef today is a bit like that Morecambe and Wise sketch where they make breakfast to music, but faster and with louder riffs.

There are, however, still chefs who prefer their work to be carried out in silence. Pierre Gagnaire of Sketch, among other restaurants, says he objects to the whole concept of music being mere background noise. Tony Fleming, of the newly Michelin-starred fish joint at the South Place hotel in east London, has been scarred by experiences at previous restaurants.

"When I was at Criterion, they used to have a big stereo and played Kiss full blast with the bass pumped right up," he says. "The speakers were on my section and it used to piss me right off. Everyone would get pumped and run about like a loon. Then when I took over one particular kitchen as head chef, the brigade of chefs I inherited played heavy metal and punk all day, loudly. That stopped when I started. In my experience, loud music does not make for a focused work environment. It does make people move and lighten their mood perhaps, but not in a good way."

Maybe he's got a point. And any junior chefs who lament the absence of music in their kitchen should reflect that things could be worse. Daniel Clifford of Midsummer House bans music "except at Christmas", but the staff who have helped him win two Michelin stars are unlikely to ask him to bring his iPod into the kitchen. He says, with an unrepentant lack of taste that fortunately he doesn't exhibit at work, that his favourite album to listen to when cooking at home is Stereophonics's Just Enough Education to Perform.

And let's not forget that the chef most closely associated with music is probably Jamie Oliver. In 2002, he put his name to the compilation album Cookin': Music to Cook By, which kicked off with Toploader. More recently, he's tried to make a case for Westlife being perfect for "preparing your salmon". Suddenly a soundtrack of silent concentration and gentle chopping doesn't seem so bad after all.