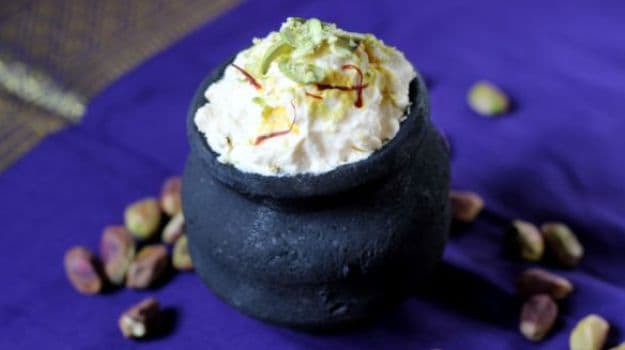 Gudi Padwa 2019 will be celebrated on Saturday, April 6th, and the festival marks the beginning of the Maharashtrian New Year. The festival marks the beginning of springtime and it typically falls in the month of Chaitra, according to the Hindu calendar. The festival is an important one for Marathi and Konkani Hindus, who celebrate it by preforming ritual pujas, decorating their houses with colourful rangolis and feasting on traditional Maharashtrian fare. The main feature of Gudi Padwa is the Gudhi flag that is hoisted outside many Maharashtrian homes and which is said to ward off evil and bring prosperity. Gudi Padva is also known as Samvatsar Padvo and it coincides with Ugadi in Andhra Pradesh and Karnataka and Chaitra Navratri in North Indian states.

Gudi Padva celebrations are incomplete without the delicious range of Marathi delicacies that are especially prepared during the festival. Since the festival falls during summers, raw mango drink - Kairi Panna - and hung curd dessert - Shrikhand - feature in Padva feast. Another quintessential Marathi dish that features prominently in any Marathi celebration is the rich and oh-so delicious puran poli. Sabudana vada and sabudana khichadi, prepared from sago or tapioca pearls, are also a part of the Padva feast, and in fact, these two are popular as breakfast dishes in Maharashtra.

Gudi Padva 2019: Vaishali Polke Shows Us Re-Create To Make Four Authentic Maharashtrian Recipes In These Videos From Her YouTube Channel Being Marathi:

A paratha-like flatbread stuffed with a rich, sweet and flavourful lentil stuffing is extremely popular in Maharashtrian homes and it is called puran poli. The stuffing is made from chana dal, which is boiled and ground to a paste. To this lentil paste, ground whole spices like fennel seeds, cinnamon, black peppercorns, etc. along with some ground jaggery are added. The covering is made from a mix of whole wheat and refined flour and after stuffing the dough with the sweet lentil filling, it is roasted with ghee on an iron griddle.

Check out the full method here:

Kairi ka panna (also called in Marathi, Kairich Panhe) is a summer drink prepared from raw mango pulp, flavourful spices, jaggery, fresh mint leaves and rock salt. The drink is prepared by first cooking the raw mango pulp in a pressure cooker. The pulp is then separated from the fruit and then jaggery, cardamom powder and rock salt are added to the warm pulp. The ingredients are mixed and once it cools down completely, it is then diluted with water.

Also Read: 5 Iconic Breakfast Dishes From Maharashtra You Have To Try

Shrikhand is a hung or strained curd desi dessert that is popular in Gujarat and Maharashtra. With the advent of summers, this dessert is prepared at homes and is especially enjoyed during Gudi Padva celebrations. It's very easy to prepare and is extremely rich, creamy and flavourful. This delightful sweet is garnished with saffron strands and nuts. Follow this recipe to prepare Shrikhand this festive season.

Also Read: Shrikhand: The Creamy And Flavourful Gujarati Dessert Is A Must-Have This Summer!

Sabudana vadas are crispy pockets of deliciousness that are prepared from a batter of soaked tapioca pearls mixed with mashed boiled potatoes, and a whole bunch of spices. The batter is moulded into flat rounds and then deep fried in oil or ghee. The piping hot sabudana vadas are also the preferred choice of vrat (fasting) foods and are savoured all around the country. Follow this easy recipe to prepare sabudana vadas this Gudi Padwa.