Happy Birthday Dharmendra: Here's Proof That The Sholay Actor Is A Fan Of Organically Grown Food! 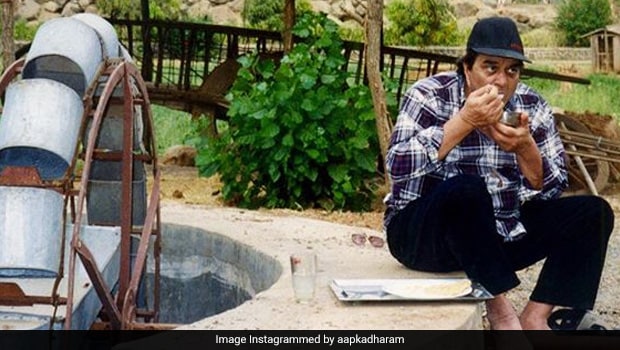 Yesteryears' Bollywood actor Dharmendra is celebrating his 83rd birthday today. The octogenarian, who has inspired a whole generation of Bollywood actors and thespians, is an icon, not just because of his acting chops, but also because of his unfailingly chirpy and positive attitude. The dashing veteran actor's film career spans almost four decades and although he is not currently seen in any films anymore, he is a legend who has fans and followers around the world. Dharmendra's acting legacy is a shining beacon in the hindi film industry and one that is very difficult to surpass. Dharmendra has an active presence on soaical media, which he uses to interact with his die-hard fans and followers. The actor regularly posts pictures and videos from his farm and farmhouse, sharing his love for organic farming and organic food with his followers on Twitter and Instagram.

Dharmendra seems to have an unmatched zest for life and an energy that seems almost infectious. His videos and posts on social media can bring a smile to anyone's face. He often expresses his love and gratitude for his fans, but even that is eclipsed by his love for organic farming and produce. One look at his social media timelines will tell you exactly what we're talking about. His Instagram feed looks like it's a tribute to the simplicity and joys of living a life on farm. Dharmendra seems to have be-friended a number of four-legged residents on his farm and he is often spotted spending quality time with them- feeding and taking care of them.

Dharmendra gave us a peak into all the vegetables that he has grown organically, in a video posted just two days ago. He says in the video, "I'm enjoying... I'm addicted to farming. You should also try it. Organic food is good for your health". He even showed us some freshly harvested onions.

Dharmendra even grows grains himself. Here's a picture of him working to sow the seeds of organic wheat:

The Sholay actor gave us a peak into his love for a modest and simple life, by posting this picture, which he said was taken at his farmhouse. "I love to eat like this", said the caption.

Here's proof that Dharmendra has also instilled the love for simple, organic, desi food in his sons. He captioned the picture as, "This is from where we are, this is what we eat, we are and we will always be connected to our roots."

Dharmendra flaunted the sweet fruits of his toil in the farm by talking about the alphonso mangoes from his farm, making us all strangely nostalgic and making us crave the quiet and simple farm life:

Well, we wish the legendary actor a very happy birthday and hope he keeps inspiring us all to switch to organic and healthy food.