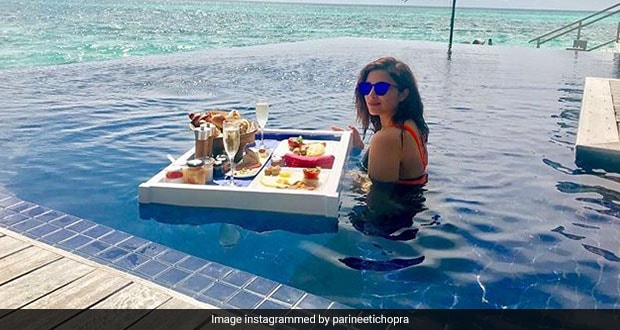 Highlights
Bollywood actor Parineeti Chopra is celebrating her 30th birthday today and she seems to be starting it with some quality time with friends. The beauty, who has 15 million followers on Instagram, has been posting pictures and videos from an undisclosed but idyllic beachside location. The 'Namaste England' actor recently also made headlines for her dazzling and sunny cover shoot for a leading English Bollywood magazine. The actor famously lost a lot of weight and revealed her new superbly toned avatar to the world, back in 2015, by dropping from a size 38 to size 30. The diva is a self-confessed foodie and in her Instagram bio, she has even called herself a hedonist- a person who likes a life of pleasure-seeking. No wonder then that Parineeti's social media pages are filled with pictures and videos from her vacations in exotic locations around the world, as well as her indulging in yummy global food.

Also Read: Diet versus Exercise: Which One Wins the Battle Really?

Talking about her struggle with cleaning up her diet, Parineeti Chopra had earlier told NDTV, "I was always thinking about food. So, it took a lot of mental strength to lose all the extra weight." She had further said that she had thought that she would never be able to give up on pizza, but she did, explaining that she made sure she balanced the calories out by eating a smaller meal later in the day or working out more the next day. Her breakfast typically consists of brown bread with egg yolks and one glass of fat-free and sugar free milk, while her lunch consists of a salad or brown rice with dal and vegetables. Parineeti Chopra typically eats dinner around 7 or 8 pm and doesn't eat anything after that. In short, Parineeti steers clear of high-fat, high-sugar and high-carb foods on a daily basis, unless she is marking her cheat day.

Parineeti Chopra has confessed several times that she has never been a fan of gymming, treadmill or the traditional workout gear. This is why the Golmaal 3 actor likes mixing things up and does a little bit of this and that to stay fit. She does hit the gym every once in a while though and her workout involves a lot of fat-burning exercises like burpees, jumping jacks, lunges, crunches, push-ups and plank, but she mixes her exercises up with swimming and a traditional martial arts form from Kerala- Kalaripayattu. She loves dancing as well and that is one of the most fun activities that doubles up as excellent workout, as it gets the whole body moving.

Parineeti has also been spotted at the fitness studio of celebrity trainer, Yasmin Karachiwala. Here's a picture of the bubbly beauty enjoying a truffle on her birthday two years ago:

Workwise, Parineeti has been keeping extremely busy as well. Although her latest release 'Namaste England' didn't do very well on the box office, she is working on a number of other much-awaited projects as well, including 'Jabariya Jodi', where she will be seen opposite Siddharth Malhotra as well as 'Sandeep Aur Pinky Farar' with Arjun Kapoor. Well, we wish the diva a very happy birthday and hope she continues to share her love for food and her 'hedonistic' side with us!