How to Bake, American-Style 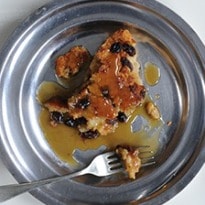 In the cultural melting-pot of the US, cuisines mix with brilliant results, not least in the baker's oven. These Jewish pastries and Creole puds will leave you seeing stars (and stripes!)

With American Independence Day just past, it seems only right that this week's column should be a tribute to the food of the United States. Those who blithely dismiss it as a land of bad fast food (and lots of it) are missing out: for every bacon cupcake or fake plastic cheese there are thousands of innovations in great food. Turn away from the baking cliches - pecan pie, doughnuts - and you'll find another American story, made all the richer for the contributions of the country's diverse population.

If you think that New York's Jewish baking legacy begins and ends with the perfect circle of a bagel, think again. This recipe comes from Eastern Europe, via New York, courtesy of Ashkenazi Jews. There's much debate over what makes an "authentic" knish - should it be round or square? Must it be savoury? - so I can't claim that my version will yield exactly the snacks that you might once have found sold out of vendors' carts on Brooklyn street corners. But I think I've captured the basic essence of traditional knishes: a soft, rich filling, crisp pastry and homely simplicity. A plump, steaming hot knish really is love on a dish.

You can experiment with fillings as much as you want: add a handful of grated cheese, or even swap the mushrooms for minced beef, fried lightly with onions. Sweet versions filled with cherries, berries and soured cream are delicious, too.

1 First, prepare the dough: mix the flour, sugar and salt in a large bowl. In a separate bowl or jug, whisk the oil, water and vinegar together, then add it to the dry ingredients. Stir to combine, knead very briefly under the heel of your hand - just enough to create a smooth dough - then place in a large bowl, cover with clingfilm and leave to rest for 1-2 hours. This resting period is important: it's during this time that the flour will hydrate and the dough will relax, making it easier to roll out. The vinegar helps with this, too, making the dough less taut and more supple.

2 While the dough rests, start making the filling. Cut any particularly large potatoes into halves or quarters, then place them in a large pan of cold water. Salt the water generously, then place over a high heat. Once the water reaches the boil, lower the heat slightly and cook the potatoes for 10-15 minutes, or until they're tender enough to prick with a fork. Drain them and set aside to cool slightly.

3 Meanwhile, cook the onion in a splash of oil with a pinch of salt on a low heat for 20 minutes. The onion should be very soft and translucent. Add the diced mushrooms and cook for a further 10 minutes or so, leaving the onions and mushrooms softened. Preheat the oven to 200C/400F/gas mark 6 and brush a large baking tray with a little oil.

4 Mash the cooked potatoes with 100‑120ml oil until smooth, but not sloppy. Stir in the mushroom and onion mixture then season generously with salt and black pepper.

5 Lightly flour the work surface, then roll out the rested dough until it's very thin, 60-70cm long and around 35cm wide. Keep flouring the surface and the rolling pin as you go to prevent sticking. Now brush all over the surface of the dough lightly with olive oil.

6 Spread the potato mixture in a 4-5cm-thick line along one of the long edges of the dough. Working quickly but gently, roll this log of filling up in the pastry to give a fat 60cm-long roll. Trim the ends, which are likely to be tapered and messy, then cut the roll into 12-14 pieces, each of which should be around 5cm long.

7 For each slice, gently pinch the cut ends to bring the pastry together and seal the filling inside. These pinched ends will be the tops/bottoms of the pastries. Arrange them on the greased baking tray and press each down to a fatter, squat shape - each pastry should be shaped into a thick disc. Brush the pastries lightly with olive oil and bake for 30-35 minutes, until golden and crisp. Serve while they're still hot.

Louisiana can't lay a definitive claim to bread pudding, but it can perhaps take credit for devising the most committedly indulgent version of it. The cream-laden, boozy puds of New Orleans may be a regional speciality, but they're all-American in spirit.

1 Put the bread in a large bowl. Whisk together the eggs, milk, double cream, whiskey, vanilla extract and sugar in a jug, then pour this all over the bread. Cover the bowl with clingfilm and leave to soak for an hour. Towards the end of this soaking time, preheat the oven to 180C/350F/gas mark 4.

2 Beat the bread mix well to break apart any big chunks, then stir in the raisins. You can add any another flourishes at this point, too: perhaps some chocolate chips, sliced banana or small fudge pieces. Melt half the butter and brush over the base and sides of a 20-23cm square tin. Pour in the bread mixture, taking care not to overfill the tin (the pudding will puff up as it bakes). Dot the remaining butter on top.

3 Bake in the preheated oven for 45 minutes, or until set, golden brown and firm to the touch. As the pudding approaches the end of its baking time, prepare the sauce. Heat the butter, cream and sugar together over a low heat until the sauce begins to boil. Let it simmer for a minute or two, then stir in the vanilla extract and whiskey. As soon as the pudding is cooked and cool enough to eat, dish it out, spoon the hot sauce over the top and serve.

Creole bread pudding from Louisiana is boozy and indulgent, while Jewish knish are homely and filling. Photograph: Jill Mead for the Guardian