How to cook the perfect baked beans 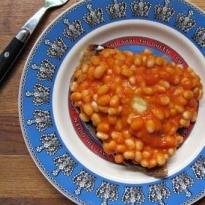 Can anything beat Heinz, is there any better toast topping and can anyone explain what beans are doing in a fry-up?

In an age of increasingly global flavours, a taste for tangy, tomatoey tinned beans - and salty Marmite or sawdusty rich tea biscuits - marks you out as an unmistakable product of the British Isles. They may be an American creation, made with New World legumes and Native American roots, but even in Boston, the epicentre of American enthusiasm for the baked bean, you won't find beans fit to grace a slice of toast.

American baked beans, stewed with pork and molasses, are quite a different beast from our own beloved version. Though Heinz began exporting their beans to Britain in 1886, somewhere along the line the recipe evolved to suit local tastes. No pork (a casualty of wartime rationing), less sugar, a thinner sauce - indeed, hungry expats in the States trade tips on where to find the real, imported, deal. Because, though a thick, treacly pork and bean stew is very nice, it's not what you want for a lazy dinner on Sunday evening when everything else is too much effort. (Or, indeed, with a cooked breakfast, if you like that kind of thing. Personally, I draw the line.) I like tinned beans. But I also like McVitie's digestives - and I still reckon my own version is better. Is it possible to improve on another classic?

Tinned beans are usually made from haricot beans, but chef and children's food writer Claire Thomson's recipe uses the larger cannellini instead, and Nigel Slater casually suggests using "pinto, haricot, broad beans etc". Cannellini are fine, though I prefer the ratio of bean to sauce you get with haricot, but, having taken Slater at his word, I find tinned broad beans distinctly weird - far too mushy.

That said, though tinned haricot beans will do at a pinch, having made Silvana Franco's recipes using them, it's preferable to use the dried sort if you have time. Not only are they far cheaper, but you run less risk of overcooking them to mush: tinned beans are already cooked to perfection, so cooking them further is a risky business.

During my research, I come across the suggestion that soaking the beans in brine makes them extra-tender. Although this goes against the received wisdom (salting dried beans and pulses is supposed to make them tough), I give it a try and find they're creamier, and, more importantly, subtly seasoned from the inside out. I also find that simmering the beans gently, rather than keeping them at a rolling boil, leads to fewer exploded casualties.

This is where things get really interesting. Beans is beans; the sauce is the thing. Most recipes I try use tinned tomatoes as the base - indeed, Thomson and Slater add little else. Tom Kerridge sticks in some tomato puree, Franco and Heston Blumenthal use fresh tomatoes, and someone by the name of Gemma Seymour, who I find in discussions online on the secrets of the Heinz sauce, uses a combination of ketchup and puree.

Fresh tomatoes are too acidic unless they're slow-cooked, and even then, they're not quite right. Blumenthal makes a four-hour "fondue" with them, which tastes great but nothing like the baked beans we know and love. Conversely, Seymour's are pretty similar to Heinz beans, which contain sugar, vinegar and spices, just like ketchup, but they're not tomatoey enough for my liking.

As I have a source of well-priced tinned baked beans next door but one, I make the difficult decision that I'm not trying to slavishly recreate them here, but make them even better - and that means using tinned tomatoes. On their own, as in Slater's recipe, however, they're too much: rich and savoury, and the addition of puree only enhances that flavour. A combination of ketchup and tinned tomatoes proves best.

Slow-cooking that sauce, reducing the tomatoes until they're jammy, as in Kerridge's recipe, makes it too thick. Although I have a bit of a soft spot for those claggy catering beans left to evaporate on a hot plate for hours on end, and a proper distaste for an overly watery sauce spreading unchecked across a plate (won't somebody think of the eggs!), it should be sufficiently liquid to moisten a piece of toast, and Kerridge's version just sits on top. It may not be an idea worthy of a Michelin-starred chef, but I find you can achieve the appropriate level of viscosity using Seymour's suggestion of cornflour mixed with water. (There's not even half enough sauce in her version, though; the beans should be swimming in the stuff.)

Kerridge and Slater nod to the bean's American heritage by starting the sauce off with smoked bacon. Bacon and beans are always a pleasant combination, but after a long simmer, the meat can become a bit bland and chewy. As I don't need the smoky flavour, I'd prefer to have it separately. (Well, really I'd rather have a sausage. Sausage and beans are a match made in heaven, and they definitely aren't better from a tin.)

They also use onions, but I prefer the garlic that Kerridge and Thomson put in, though in slightly subtler quantities than the latter suggests - it shouldn't taste like a pasta sauce. I'm not keen on her sage leaves for this reason, but Slater and Franco's carrot and celery get through because they add a sweet and savoury note, which works well with the other flavours. I will be pureeing the sauce, however, so no chunks remain - not because I need to hide my vegetables, but to help it cling to the beans.

Kerridge and Slater add dark brown sugar and treacle respectively, Kerridge in such large quantities that it completely overpowers his red-wine vinegar, making his beans far too sweet for my taste. Ketchup will cover sweet and sour bases, so I don't need Franco's Worcestershire sauce either. Seymour adds baking powder "to kill the acidity" of the ketchup, but I don't think that's necessary with a smaller amount.

I have no words for Blumenthal's star anise.

Only Blumenthal actually bakes the beans: the others, faithful to the happily misleading name, stew them instead (though sadly not inside tins, like the real deal). Combining the beans and sauce too early leaves the beans soft and sludgy - to avoid this, Thomson and Seymour cook the two separately, only mixing them for serving. Texture-wise, this works perfectly, but I think the flavours need more time to mingle; not two hours, as Kerridge suggests, but a good 15 minutes of happy socialising. What you do with them then is entirely up to you, but if you must add them to your breakfast, it will not be with my blessing.

Dissolve the salt in 3.5 litres of water and add the beans. Leave to soak for at least eight hours, then drain and rinse. Put in a large pan and cover with fresh water. Bring to the boil, skim off the scum that rises to the top, then turn down the heat and simmer until just tender but not falling apart (how long will depend on the age of your beans).

Meanwhile, make the sauce. Heat the oil in a medium pan over a moderate heat and add the garlic. Fry briefly, stirring, until fragrant, then add the carrot and celery. Turn the heat down and cook until well softened; about 20-25 minutes.

Add the tomatoes and ketchup and stir together. Season well and simmer for 10 minutes, then puree until smooth. Mix the cornflour to a paste with a little water, then whisk into the pan, followed by about 300ml water.

Season to taste (you can add more ketchup if you like, I won't judge), then add the beans and simmer for 15 minutes. Add a knob of butter before serving if you're feeling particularly decadent.

British-style baked beans: culinary essential or something you had to grow up with to appreciate? How do you like yours, which is the best brand on the shelves and will anyone explain to me what they're doing in a fry-up?