How to Make Granola at Home 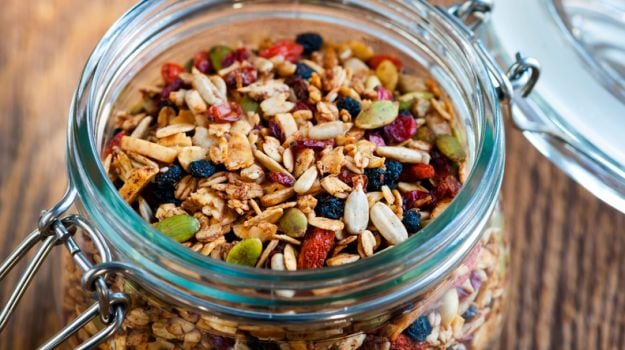 Many proponents of healthy eating will tell you, breakfast is the single most important meal of the day because it wakes up your body's metabolism. People who eat breakfast are better fueled for the day than people who skip breakfast. They also have better eating habits as they are less likely to be hungry for snacks during the day. Honestly, starting a day minus breakfast amounts to starting the car with no fuel in it.

The big breakfast bummer though, is the effort that is likely to go into preparing a meal that is nutritious and tasty. The struggle that most people who want to eat healthy are faced with is that nutritious may not always be delicious. However, a granola is one thing for starters, that could turn that myth on its head.

Granola can be used both for breakfast and as a mid-meal snack that is made using oats, seeds, nuts, honey or similar low-calorie sweeteners - combined together till it is crisp and toasted. Stirring while baking helps maintain its consistency to make it a good breakfast mix. If you would like it lumpy to use as a snack, simply don't stir it. Dried fruits, such as dried apricots, candied and dried pineapples or more commonly, raisins, prunes or dates may be added to increase nutritional value or as substitutes for sweeteners.

Why is Granola Good for You?

The fact that it is nutritious, lightweight and easy to store makes granola an ideal choice for hikers, campers or backpackers. Granola can often be made into a bar - which makes it easy to carry for packed lunches, hiking, or just on the go.

Besides the fact that it can be eaten when combined with yogurt, honey, maple syrup, milk and so on, granola makes for a crunchy topping for several pastries or desserts. Besides, baking your own granola at home will make your entire home smell like heaven. (Nutty, sweet, amazing heaven)!

And for those of you who really love trivia, granula and granola were registered trademarks in the late 19th century in the United States as foods consisting of whole grain products crumbled and then baked until crisp. These were in contrast to the at that time (about 1900) contemporary invention, muesli, which is traditionally neither baked nor sweetened.

Granola was invented in 1863 in Dansville, New York, by Dr. James Caleb Jackson at the Jackson Sanatorium - a prominent health spa that operated into the early 20th century on the hillside overlooking Dansville.

Make Your Own Granola

All granolas are essentially variations of the same technique. Try out this meal-in-a-bowl granola for that super yummy start to a morning. The best part - it is simple to make and you can make a batch to last a week.

1. Mix all the ingredients thoroughly in a bowl and put on a baking tray. Bake for 20 minutes till desired golden colour is attained.

2. Let it cool completely and store well. When you wish to eat it, sprinkle some cranberries and a handful of chocolate chips and enjoy with yoghurt, milk or just as a snack.

Promoted
Listen to the latest songs, only on JioSaavn.com
One can catch a glimpse of her life and her love for food through her social media platforms and Youtube channel where she loves to showcase her classic creations and the magic that she makes at her Patisserie Royale.