New Delhi's Indian Accent, has been awarded 60th position on the first cut of the 2019 list of the organization 'The World's 50 Best Restaurants'. 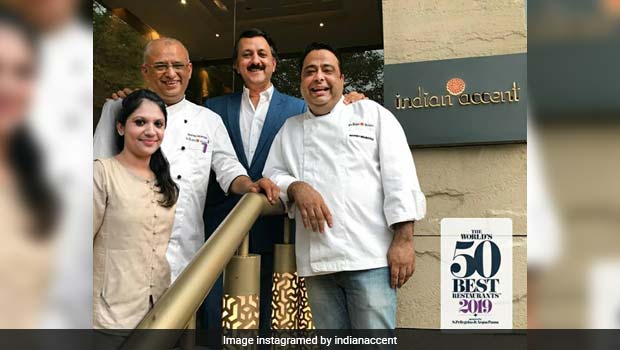 Indian Accent, Delhi was the only Indian entry on the first cut of the 2019 list

New Delhi's Indian Accent, which made it to TIME's list of 100 best restaurants in the world in 2018, has been awarded 60th position on the 2019 list of the organization 'The World's 50 Best Restaurants'. The annual awards ceremony of the organisation will take place in Marina Bay, Singapore, on Tuesday, June 25th, 2019. Chef Manish Mehrotra's Indian Accent advanced 30 positions to stand at No. 60 on 2019's special list of 120 winners. The World's 50 Best Restaurants 2019, First Cut named restaurants from 51 to 120 positions and the list includes restaurants from 25 different countries, spread across five different continents. The list also has 21 new entrants, located in 15 different countries. The list is compiled by an Academy consisting of over a thousand jurists including chefs, travel and food experts and food writers, who vote to decide which restaurants make it to the final lists.

We're honoured to be ranked #60 on @TheWorlds50Best list 2019 - a 30 point jump from last year! A big thank you to all our diners! #indianaccentdelhi#worlds50besthttps://t.co/2tVIkoUojfpic.twitter.com/jJM1OX8l9U

Chef Manish Mehrotra also thanked Indian Accent guests and patrons, on behalf of the restaurant's team, for the win:

Describing the restaurant located in New Delhi's Lodhi Road, a blog on the organisation's official website said, "A regular on the Asia's 50 Best Restaurants list, Indian Accent is the home of chef Manish Mehrotra's truly innovative Indian fine dining. For the full experience, take the chef's tasting menu - also available as a vegetarian option - with highlights such as grilled sea bass with sweet potato and Goan mango curry." Among their must-have dishes from Indian Accent were the restaurants' signature breads that come in nine different types including "butter chicken, wild mushroom, palak paneer and chilli hoisin duck kulchas."

The first cut of 2019 list of The World's 50 Best Restaurants also features three Italian restaurants, which are all first time entrants and there were also six re-entries from four countries: Denmark, France, South Africa and Japan. However, the United States of America lead the pack in terms of volume, with a total of seven restaurants from the country making it to the list, including one new entrant.