Bengali macher kalia has a thicker gravy, with a perfect balance of sweet and spicy flavours. 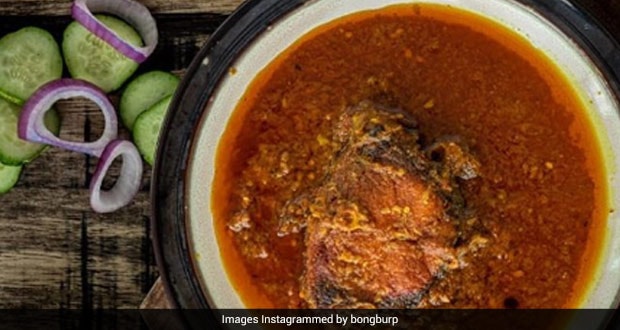 It won't be an exaggeration to say that Bengalis' love for 'macher jhol' is no secret to the world! It probably defines the food culture of Bengal. A confluence of culinary styles of East Bengal (now Bangladesh) and West Bengal, this cuisine boasts of an enormous variety of fish and their recipes. From doi mach to macher tok and bhapa mach - the list goes long! One such popular dish is macher kalia - a special sweet and spicy fish curry that is a must in any celebratory feast menu.

It is said that this macher kalia is a modified Bengali version of the famous qalia of the Mughal cuisine. For the uninitiated, qalia is milk- or water-based dish that makes one of the two pillars of the Mughal cuisine (the other one being qorma). Legend has it, the Arab traders, who used to land on the shores of Bengal, modified their kalia recipe with the locally available ingredients and fish, which has over the time evolved to the present version of the recipe. Another story says that the khansama/bawarchi of the Nawabs of Bengal developed the now-used version of kalia, by replacing the Badshahi masalas with the local produce.

Bengali macher kalia has a thicker gravy, with a perfect balance of sweet and spicy flavours. If you explore, you may find various recipes of macher kalia- some uses onion and tomato, while some uses dahi. The recipe we are sharing today is dubbed to be the simplest in the lot, and can be prepared in less than an hour, with bare minimum masalas and ingredients. What makes this recipe special is the inclusion of famous Bengali mishti doi (sweet yogurt) in it!

Salt as per taste

Clean the pieces of fish and marinate with half teaspoon turmeric and salt. Set it aside till you get done with rest of the Mise En.

Take half cup of lukewarm water and add 2 teaspoons of jeera powder, 1 teaspoon Kashmiri red chilli powder, half teaspoon turmeric, some salt and mix it to a paste.

Take the mixing bowl, pour the mishti doi and some water and mix well till it turns smooth; the consistency of the mix should be medium (not thick, not even runny).

When all these preparations are in place, heat 5-6 tablespoons of oil in a kadhai with a deep base.

Fry the fish pieces well, till they get a nice brown colour on the outer layer. Make sure you fry the fishes in small batches (2 at a time). Take them out and keep aside.

Now pour the rest of the oil to the kadhai and add grated ginger and a whole red chilli to it. Fry them well on a medium flame.

Pour the masala paste in the kadhai and fry them together till the masala releases oil.

At this point, pour the dahi mix in the kadhai and give a stir. Lower the flame, close the lid and let it cook for a while.

When the gravy starts releasing oil and gets a rich and dark colour, add the fried fish, soaked raisins, ghee and garam masala powder to it and switch off the flame.

Again close the lid and keep it as is till you serve the meal.

Try it at home today and treat your family with a lavish meal. Happy cooking!