Jaynagarer Moya: A Delicate Popped Rice Sweet Treat From Bengal You Must Try

The subtle sweetness and unique textures of this sweet are totally worth the effort to make the trek to Kolkata. You could also try making a moa at home, of course, it won't be a Jaynagarer Moa. 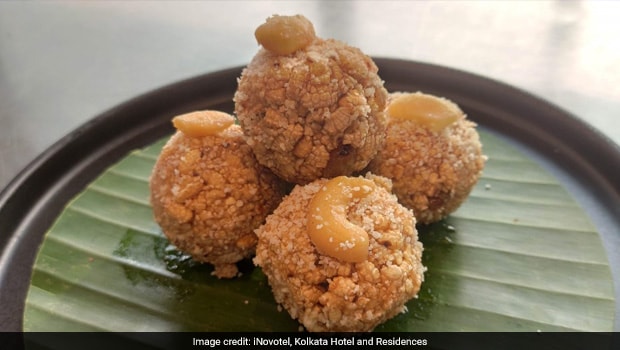 No GI Tag (that assigns a product to a particular region - say Darjeeling tea) created more buzz in recent times - almost since India enacted the Geographical Indications of Goods (Registration and Protection) Act in 1999, than the Banglar Rasagolla. It only came in 2017, after a bittersweet tussle between Odisha and West Bengal who fought hard to claim the origins of this sweet. For a state that is almost synonymous with sweets (aka mishti), it's almost odd that there are only two sweets that have been awarded the prestigious GI Tag. The Rasagolla wasn't the first. That honour belongs to one of the state's lesser known sweets - Jaynagarer Moa (or Moya).

I'm obsessed with Nolen Gur, that translates to new jaggery and is extracted from date palm trees using deft skills as the mercury drops during the winter months in West Bengal. It's one reason I keep coming back to Kolkata during the winter months when sweet shops across the city are busy crafting scrumptious nolen gur delicacies. From the Jhol Bhora Sondesh (where liquid Nolen Gur is cleverly concealed inside the classic Nolen Gur Sondesh) to the Monohora, a Sondesh encased in Nolen Gur, there are many sweets that are winter (typically December - February) exclusives. It was at Bangla Mishti Hub in the New Town area (that rounds up some of the city's iconic sweet shops under one roof), where I first discovered the Moa last winter. It's here that I heard about 150 sweet shops in a small town in the 24 Parganas district - Jaynagar (also spelt as Joynagar) that keep this sweet tradition alive.

I came back to Kolkata a couple of weeks back for my winter fill of the Moa. And as I trekked through some of North Kolkata's iconic sweet shops, Rumpa Das, a Kolkata-based journalist and culinary enthusiast regaled me with a fascinating tale about the origins of this sweet. It begins in a village called Bahru in 24 Parganas district. Jamini one of the residents of this village created the original moa with just two ingredients - nolen gur and khoi. In 1929, Purnachandra Ghosh and Nityagopal Sarkar (both from Jaynagar) improvised on the original recipe by incorporating ingredients like ghee, cardamom and cashew. This eventually came to be known as the Jaynagarer Moa. Of course, you will hear conflicting versions of this tale in both Jaynagar and Bahru.

The Moa may not be as popular outside Bengal but it's a delicacy that Kolkata's Mishti fiends look forward to every winter. Both the core ingredients - Nolen Gur and the Kanakchur Dhan (a popped rice crafted from a special variety of aromatic rice) are only available in the winter months. It's also not uncommon to find versions that use Morishal dhan (a different rice varietal) instead of Kanackhur. Unfortunately, the popularity of this dish has spawned a host of imitations usually made with inferior ingredients. But a die-hard mishti fan can tell between these imitations and the real deal. The other challenge is shelf life. It doesn't usually last more than 4 days and loses some of its moist, chewy appeal if it's put away in a refrigerator. The subtle sweetness and unique textures of this sweet are totally worth the effort to make the trek to Kolkata. You could also try making a moa at home, of course it won't be a Jaynagarer Moa.

I tried this version of the Moa last year as part of an authentic Bengali meal at the Novotel, Kolkata and it's quite easy to make at home. You could order the popped rice online.

If you don't make it to Kolkata or West Bengal during the winter months you could try some of the Moa that are available around the year like the Murir Moa that's made with puffed rice. But they are still no match for the Jayanagaer Moa.