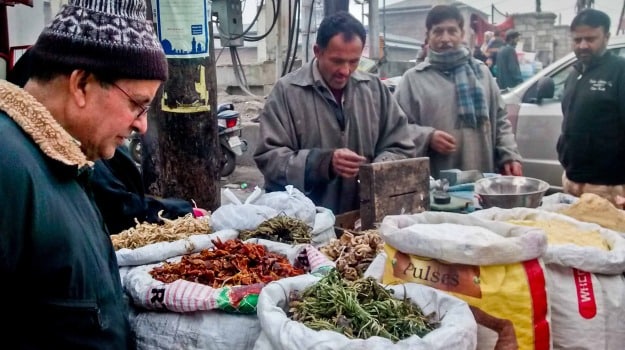 For centuries, locals in the landlocked Kashmir Valley have relished dried vegetables, brinjal, tomatoes, pumpkins, turnips, smoked fish and wild herbs to survive the extreme winter. As connectivity with the outside world would often get snapped because of heavy snowfall, locals would painstakingly store washed and dried vegetables to hold them in good stead during winter, which lasts for almost for five months.

Fresh vegetables are now available round the year in the local markets due to better road connectivity and superior vegetable growing techniques - but for nostalgia, the locals still throng markets to buy dried delicacies.

Special to winter cuisine in the Valley is smoked fish known locally as 'farrigad' and dried fish called 'hokhegad'. Many Kashmiris who have migrated out of the Valley still request their friends to bring them these dried delicacies. "My first request to friends in the Valley is to bring me some hokhegad. Cooking these is no less than a celebration. These delicacies are part of our tradition we get nostalgic about them," says banker Ashok Koul.

Just like this father, Bashir Ahmad, 50, has been selling dried vegetables in the Fatah Kadal area of old Srinagar for almost 18 years. He visits villages during the summer months to buy vegetables, that are then dried and stored for his customers during the winter. "People don't buy these things now with the same enthusiasm as they used to in the past. Still, I earn enough to live honestly. The sale of  these dried vegetables starts from the month of November," says Ahmad, who sells dried pumpkin scalings for Rs.400 a kilogram. Muhammad Ashraf, 45, another seller in old city, says the process of drying vegetables starts in June-July. Abdul Aziz, 58, a resident of the Soura area, has been selling smoked fish for the last 30 years.

Promoted
Listen to the latest songs, only on JioSaavn.com
It is not only for their roughage value that Kashmiris eat dried vegetables. Some of the vegetables and herbs grown in the wild are also consumed for their medicinal value. "Iberian knapweed, grown in the wild and locally known as 'kraich', is dried and eaten as it is believed to be good for the eyesight. Similarly, dandelion, known as 'hand', is given to anaemic patients as it is rich in iron. 'Buem' or star lotus is believed to be good for arthritis patients as it relieves the swelling of joints," says G.A.Bhat, a botany professor at the University of Kashmir. Dried water chestnuts are believed to provide relief to those with backaches and urinary tract infections, as also diabetics.

The aroma of dried brinjal scalings, dried tomato and lean mutton cooked on firewood-lit hearths is something the younger generation of Kashmiris have heard of but not been witness to. These are treasures which can be narrated, but not shared in the times of the internet, satellite television and mobile phones," says Abdul Rehman Sheikh, 86, a resident of north Kashmir's Ganderbal district.