Kashmiri cuisine is known for its various meat preparations. Yakhni is a light curry or broth made using yogurt and saffron among other ingredients. 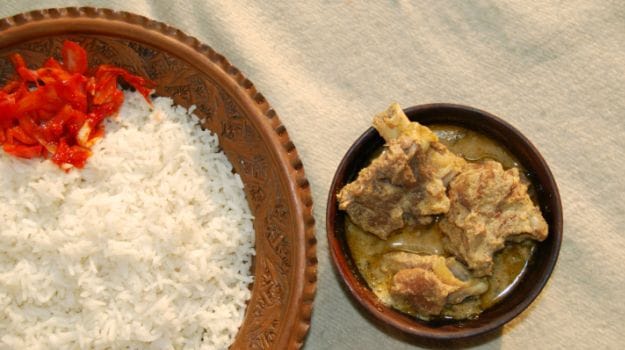 Kashmiri cuisine is known for its various meat preparations, cooked meticulously using a range of spices and flavouring agents. Partake in a Kashmiri feast and you are bound to come across one of their most loved meat dishes - Yakhni. The silky smooth curry with falling-off-the-bone meat is an absolute treat for non-vegetarians. Team it with a plate of aromatic pulao loaded with dry fruits and nuts, and you are sure to never forget this meal in your lifetime. Yes, that's the power it holds even with its subtle flavouring.

Yakhni refers to a light curry or broth which has to include two main ingredients other than the meat - yoghurt and saffron (kesar). The yoghurt lends in richness to the broth while saffron adds a tempting yellow hue. You need to labour a little before being able to relish the slow-cooked dish. It is said that the

Yakhni came to be known in Kashmir during Akbar's rule. Yoghurt-based meat curries were part of Persian cuisine, and the Emperor introduced this style of cooking to his new state when he annexed it in 1586. Akhbar in fact influenced various regional cuisines if northern India, which have now evolved to become exclusives cuisines by their own right.

Yakhni dishes are also seen in Greek and Turkish cuisines, but what sets the Kashmiri Yakhni apart is the absence of tomatoes. Certain recipes also avoid onions and garlic since the Kashmiri pundits didn't use those ingredients in their cooking. At a time when almost all Indian curry recipes included turmeric, onions and tomatoes as base ingredients, Yakhni was a class apart sans their addition.

While originally Yakhni meant a light curry made with lamb meat, over the years it has gone on to include chicken and even vegetarian versions like Paneer Yakhni. So, how is yakhni made? The meat is first cooked along with a handful of spices to acquire an aromatic broth, then the pieces are removed and yoghurt is added and left to simmer. The meat pieces are again added back to the broth and it is slow-cooked for some more time to finally acquire the smooth texture with delicate meat. The spices that are commonly added are fennel seeds, cinnamon, cardamom and cloves, among others.

Another variation of yakhni is the Yakhni Pulao, where rice is cooked in the broth along with the meat pieces to prepare a delectable meal. It is also referred to as Yakhni Biryani and served commonly with a side of raita.

Yakhni Dishes to Try at Home

Here are some Yakhni dishes for you to try -

The Kashmiri pulao is sure to impress with this subtle but aromatic flavours.

Succulent pieces of mutton are infused with cardamom, cinnamon, bay leaves and a host of other Kashmiri flavours and balanced out in a thick yogurt based gravy.

Here is your boring lauki made interesting with a dash of spices and curd to give it a silky smooth texture.

Add some oomph to your weekend cooking by trying these Yakhni recipes. You do need to put in a little effort, but trust us, once the dish is done, it will more than make up for your efforts. Happy cooking!