Kimchi: Why Everyone is Going Crazy for Fiery Fermented Foods 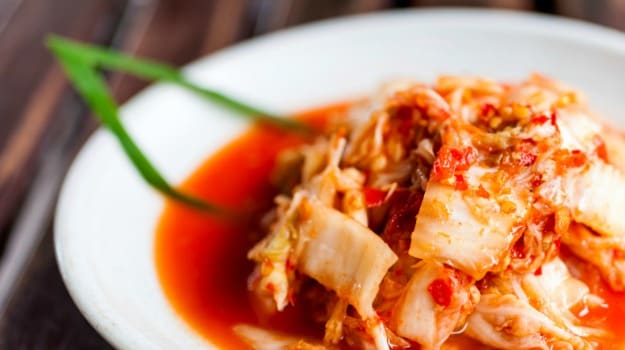 From kimchi to kombucha, fermented and pickled foods are popping up on menus everywhere.

Fermenting and pickling didn't start off being about taste. It was primarily a means of a survival: a way of preserving food from harvest to harvest with origins in ancient times.

The health benefits of these natural means of storage didn't take long to catch on with Aristotle praising the healing effects of pickled cucumbers back in 850 BC. But forget about preservation and health - now it's all about the taste.

The combination of funky and tart is surprisingly addictive and from kimchi to kombucha, fermented and pickled food are popping up on menus all over town. In case you're wondering fermenting refers to preserving food using a process which incorporates the natural bacteria already present in certain foods to produce lactic acid and preserve the food while pickling employs an acidic element such as vinegar to aid preservation.

To its fans, kimchi is the ultimate fermented dish: part fiery, part funky and a little bit feral, it's a staple of Korean cuisine. For my kimchi fix, I love the homemade kimchi at Frying Colours in Kensington, Melbourne.

Chef Min Hui Lee makes all the kimchi at Frying Colours based on his grandmother's recipe. He mixes the shredded cabbage with salt and sugar, leaves it for a day or so at room temperature to acquire that sour flavor and then puts it away to ferment for six months.

For a dish that's so long in the making the cabbage kimchi at Frying Colours is mellow and balanced with just the right amount of chilli kick. It works perfectly as an accompaniment to KFC (Korean Fried Chicken) and bibimbap.

Of course, there are a myriad of vegetables that can be fermented, not just cabbage. Moon Park in Sydney's Redfern serves up kimchi with a twist, made using cucumber and nashi pear. It's got the spice and heat of a traditional kimchi but is also fresh and light.

But you don't have to go to a restaurant to get your pickling and fermenting fix. In a sold out session at the recent Melbourne Food & Wine Festival, Benjamin Cooper, head chef at Kong, gave a master class in how to pickle and ferment at home.

Cooper is somewhat of an expert having made 100 kilos of kimchi ahead of Kong's opening last year. Like many chefs his method is more "a handful of salt" and a "handful of sugar" and short on actual recipe details. But Cooper swears it's pretty hard to mess it up and says we shouldn't be worried about poisoning our nearest and dearest. "Just get loose," Cooper says.

He believes renewed interest in traditional techniques like fermenting and pickling is a response to the technical wizardry of chefs like Heston Blumenthal. "It's sort of come out the other side of that now and what we're facing is the exact opposite of it. We've gone back to things which are 100 to ... 1000 years old using techniques that have been around for forever and a day."

Don't mind me. I'll just be getting loose in the kitchen with a heap of shredded cabbage.