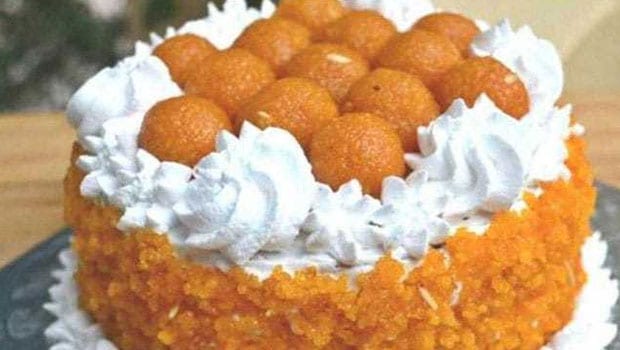 The Bharatiya Janata Party (BJP) has been in celebration mode ever since the announcement of the exit polls, which predicted that the party is set for a second term as India's biggest party in the Lok Sabha. As counting of votes progresses, trends seem to be confirming that the party headed by Amit Shah is going to get a huge mandate in Lok Sabha 2019 elections. Confident of the win, the party workers had started preparing for celebratory events and post-election jamborees all around the country. New Delhi being the capital city, the BJP has made special preparations to mark the win that is seemingly an even bigger one than what Prime Minister Narendra Modi got in 2014 elections.

Any celebration in India is incomplete without loads of sweets and sure enough, the Bharatiya Janata Party (BJP) arranged a huge order of delectable-looking ladoo cakes from Delhi's popular Bengali Market. The party has ordered a 7-kg ladoo cake that seems to have been made from motichoor ladoosas well as nine cakes of five kilograms each. The cost of the cake is Rs. 1,000 per kg. That is not all, the party had also placed an order for lotus-shaped barfis and confectioneries, as well as special pista-badam barfis. The latter are said to be priced at Rs. 2,000 per kg and 50 kg of the deliciousbarfiswas ordered for the celebrations. The sweets were ordered from Bengali Pastry Shop located in Bengali Market.

Take a look at BJP's celebratory sweet meats ready to be dispatched, as soon as the verdict comes in:

The cakes will be sent to the headquarters of the Bharatiya Janata Party (BJP) in the capital, where the party workers are expected to converge, in order to celebrate the impending win. Meanwhile, in Jharkhand as well, preparations were in full swing yesterday, where in the capital city of Ranchi, party workers were seen rolling ladoos.

Take a look at pictures from BJP's Ranchi branch yesterday:

Lok Sabha elections 2019 took place in a massive seven-phase voting exercise. It began on April 11, 2019 and concluded on May 19, 2019 to constitute the 17th Lok Sabha of the Parliament.