Why You Should Not Avoid Spices In Monsoon: 8 Spices You Must Have In Monsoon

Spices are laden with compounds that help keep us healthy and while it is good to take light food in the rainy season, some spices must be added to our food to protect us against infections. 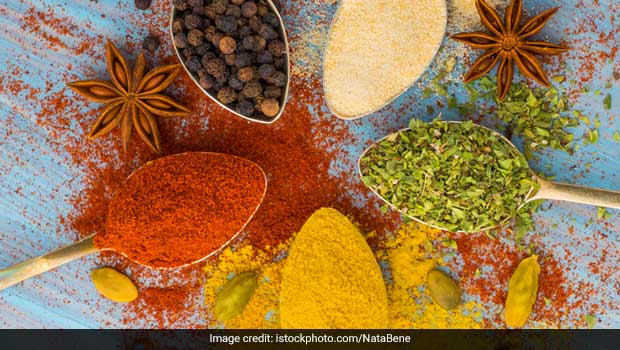 Some spices are better and a must-have in the monsoon season.

Spices are a quintessential part of every kitchen in the world, but in Indian kitchens, we have probably the most exhaustive variety of spices. Spices add flavour and taste to our meals. These spices are also laden with compounds that help keep us healthy. Ayurveda taught us this and today the medical fraternity is aware of the health benefitting properties of spices. They have been put through thorough experiments and have proven their worth and given us the scientific explanation for what our traditional eating patterns taught. In fact, today we are looking at spices as functional foods.

(Also Read: Monsoon Immunity Tips: Why Is It A Good Idea To Include More Spices In Your Soups)

Today, I am going to explain why some spices are better and a must-have in the monsoon season. Ayurveda divides the year into six seasons, namely: Shishira, Vasanta, Grishma Varsha, Sharad and Hemant. This is based on the solar movements into the summer and winter solstice positions. Varsha, the rainy season is characterised by an aggravation of vata dosha and an accumulation of pita dosha. It is also a season for impaired immunity and slow digestion. While it is good to take light food in the rainy season, spices must be added to our food to protect us against infections like diarrhoea, colds, flu, and diseases like dengue that the rains bring.

Here Are 8 Spices That You Must Have In Monsoon Season:

1. Hing (or asafoetida) is a must-have. It helps enhancing digestion and keeps flatulence at bay. It is also good for colic pain; in fact, rubbing Hing dissolved in water on small babies bloated tummies is a common home remedy. The bio active compounds present in this gum resin show strong antioxidant, antiviral, and anti-fungal activities. It was used in 1918 against the Spanish Flu and has been shown to be effective against H1N1 too. Therefore, using this spice in this season may protect you against not just regular rainy season ailments but also against the pandemic around us.

2. Ginger is a must have spice in monsoons. It pacifies the vata dosha, which is aggravated in monsoon - it also keeps the digestion in top form. Digestion is the first system to be affected by monsoon season, as infections from food are very common during the rainy season; therefore, keeping the digestive system healthy becomes important. Ginger is also known to be a great remedy for sore throat, cold and cough. Its antiviral and antibacterial actions are well documented, especially for flu. It is also a natural expectorant - it loosens the mucus in the lungs while soothing the tissue.

(Alsol Read: 5 Easy Tips To Include More Ginger In Your Diet)

3. Ajwain is a known digestion stimulator. The essential oils, bioactive compounds, and minerals present in ajwain help alleviate nausea and stomach-ache; both are common of an unhealthy/weak digestive system. Taking Ajwain water will help keep the digestion in top gear.

4. Saunf is very aromatic spice and is traditionally chewed after a meal as a mouth freshener; but the science behind the use of this humble spice is actually the fact that it contains active compounds that help digestion, relive flatulence and prevent indigestion. Saunf can be had as an infusion, after meals or even added to the meal.

5. Jeera or Cumin promotes digestion by speeding up the release of digestive enzymes and the release of bile from the liver. Cumin is also a good source of phytochemical compounds that are powerful antioxidants. These two properties together make it a must have through the year, especially in monsoons when we are more susceptible to have infections, and digestion system is more vulnerable.

6. Cinnamon: The polyphenols present in cinnamon make it one of the most important spices. Other than the presence of antioxidants, cinnamon has compounds that show anti-inflammatory action - helps repair the body tissue and strengthens it to fight infection at the same time. Another compound, Cinnamaldehyde in cinnamon, helps with respiratory tract infections.

(Also Read: Cinnamon Milk: 5 Health Benefits Of The Spiced Milk And How To Make It)

7. Garlic is a well-known immunity booster. Garlic contains allicin - its active agent. On ingestion, compounds formed from allicin have shown to boost the immune reaction of white blood cells against flu viruses. Garlic should be chopped or crushed for getting the benefits. Adding garlic to your daily meals is an easy way to boost your immunity.

8. Turmeric: Antioxidant, anti-inflammatory and immunity-boosting properties of turmeric makes it a must-have spice in your kitchens. And the star behind the popularity of this spice is curcumin - a bio active compound of turmeric. As per various medical studies, it is now well-established that turmeric improves immunity and protects the body from infections. In addition, Ayurveda also recommends turmeric to balance vata and pita doshas, which are most affected during the monsoon.

This is not an exhaustive list; there are many more spices and herbs that protect our body and boost our health. Add spices to your meals, drink them as infusions, make a kada with two or more combinations - the idea is to take these wonderful little gifts of nature and keep yourself and your family healthy this monsoon.