Navratri 2017 Special: The Significance of Ghee in Indian Festive Rituals

Have you ever wondered why the Navratri Navami Halwa is only cooked in ghee? Or why pooris were traditionally fried in "pure ghee" to be fit as festive offerings? 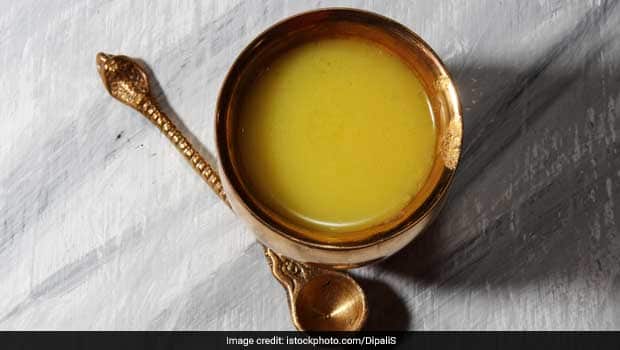 Water chestnuts, samak rice, sago, sweet potatoes... There are many "fasting foods" associated with the Navratri but one ingredient that often gets overlooked when we talk of ritualistic fare (inventive or traditional) is ghee. Ghee, of course, was crucial to Aryan cooking and purification rituals. During the nine days of Navratri, when small havans at home replicate the older rituals of sacrificial fires of the Aryans on a micro scale, ghee is an ingredient that is much in demand. It is used to stoke the fire, and to offer foods to the gods - rituals where you dip pairs of cloves in ghee and let them crackle in fire are supposed to be exactly that. But more pertinently to this piece, it is an ingredient without which the final Navratri offerings, of halwa, poori and black gram offered to the goddess and pre-pubescent girls looked upon as incarnations of the sacred feminine, cannot be cooked at all.

Vedic cooking divided all food into kachcha khana (not cooked in ghee and ritualistically impure) and pucca khana (sanctified by cooking in ghee). While modern Indian kitchens may no longer pay heed to such divisions, festive rituals make sure that we are continuing with these traditions, even if unknowingly.

Foods cooked in pure ghee is deemed fit for the Gods

Have you ever wondered why the Navami halwa is only cooked in ghee? Or why pooris were traditionally fried in "pure ghee" to be fit as festive offerings? As food historian KT Achaya has recorded, there were strict rituals even concerning the order in which ghee was added to the food, which determined whether the resulting dish would turn out to be pucca khana, fit for festive rituals, or kachcha khana. Rice had to be first roasted in ghee, before adding milk and sugar to it to give you kheer - offered as prasad, and a typical ritualistic pucca food. On the other hand, if you simply boiled milk and rice together, adding ghee later, it would be deemed doodh-bhaat, a kuchcha khana.

On Navami, the halwa that is made as prasad has semolina roasted in ghee before water and sugar is added to it, thus making it sanctified food. Similarly pooris, fried in ghee, are also deemed ritualistically pure and thus festive foods.

On Navami, the halwa that is made as prasad has semolina roasted in ghee; Image credit: Istock

The taste of ghee is of course unique and despite suffering a major loss of reputation some decades ago when it was deemed to clog up arteries and thus labelled "unhealthy", ghee is back as a superfood even amongst modern users. Nutritionists these days promote it as a healthy fat - at any rate better than the daldas and other ghee-like products full of transfats that had replaced it in the 1960s-70s. Used in moderation, it may be better than many of the refined oils that we indiscriminately use. It is certainly one of the oldest foods of the Subcontinent and suited thus to our dietary conditions.

The traditional way to make ghee at home has always been by 1. Boiling milk, 2. Adding a little curd to it to make it into fresh curd, 3. Watering and churning this to give butter, and 4. Heating the curd to boil away the water and obtaining ghee. Charaka recommended its use during autumn (according to Achaya), so it is perhaps fitting that the Navratras that usher in the season, also usher in its enhanced use in our foods.

Ghee is back as a superfood even amongst modern users; Image credit: Istock

Listen to the latest songs, only on JioSaavn.com
About the Author: