Nigel Slater: five ways to use your loaf 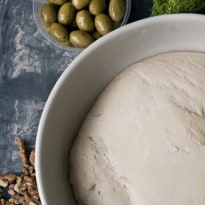 A bag of flour, a packet or two of dried yeast, salt and some warm water and you could make a couple of loaves. But you could also make one loaf and some pizza, a herb-freckled, olive oil-drenched focaccia or even some sweet, sticky cinnamon-scented buns. Batch baking means we can have a treat for now and a loaf for later.

If I'm baking bread at the weekend, then often I double up the quantities and use half the dough for an unexpected treat. It works best with a straightforward white loaf, to which I can add olive oil and thyme for a focaccia, a couple of pizzas with goat's cheese or maybe some thick fresh croûtes for a batch of soup.

So, from one basic bread dough, you can make the family loaf and have a bit of fun in the kitchen too. Maple syrup buns anyone?

To make the dough using a machine: put the flour into the bowl of a food mixer fitted with a dough hook.

Add the salt and the fast-acting yeast and mix thoroughly. Pour in the water, with the machine running at a moderate speed, and mix till you have a slightly sticky dough. Transfer to a lightly floured bowl that allows room for the dough to expand, then leave in a warm, draught-free place for an hour or so until the dough has almost doubled in size.

To make the dough by hand: put the flour and salt and yeast into a large bowl, mix well then pour in the water to make a sticky dough.

Keep kneading until the dough no longer sticks to the board. Continue kneading in no particular fashion for a full five minutes then put the dough into a floured bowl and set aside, covered with clingfilm or a clean tea towel, until it has risen to double its size. This generally takes anything up to an hour depending on the warmth of your room.

Set the oven at 220C/gas mark 7. Halve the dough, then shape each half into a round or press into a medium-sized loaf tin. Leave in a warm place, covered with a clean tea towel, till they are well risen, then bake for about 40 minutes till they sound hollow when tapped on the base. Remove from the tin or baking sheet and leave to cool.

Rub the bottom of the baking tin with a little of the oil. Set the oven at 220C/gas mark 7.

Remove the dough from its bowl (it will sink, but no matter) on to a lightly floured work surface. Roughly chop the olives and thyme leaves then knead them into the dough. Place the dough in the baking tin and push it firmly to flatten it. Cover as much of the bottom as you can, but don't worry if it doesn't quite cover it. Set aside, covered with clingfilm, for a further 30 minutes or so, till well risen.

With a floured finger, push several holes deep into the dough, then spoon over half the olive oil. Scatter liberally with salt flakes. Bake for 25-30 minutes till pale gold, then spoon over the remaining oil.

While still warm, free the bread from the pan with a palette knife, leave to cool a little, then tear into pieces.

I use fresh Italian sausages for this, flavoured with black pepper and fennel seed. They are often available from Italian delis. Otherwise, any good butcher's sausage will do.

Set the oven at 250C/gas mark 9 and place either a pizza stone or a baking sheet in there to get hot.

Split the dough in half and roll out the dough to make two discs. Crumble the goat's cheese and tear the mozzarella into small pieces and scatter both cheeses over the dough. Squeeze the sausage meat from its skins and break into small lumps, then dot these over the cheese. Trickle a little olive oil over the surface then slide on to the hot pizza stone or baking tray. Bake for 10-12 minutes until the dough is crisp and risen and the cheese has melted but not coloured.

Leave for a minute to settle down then cut into wedges and eat.

One of the loaves above will make more than enough croûtes for this. Or simply use any loaf you have. I toast them with a thick green lotion made by blitzing herbs and olive oil. Sometimes it will be dill other times thyme or rosemary, depending on which soup they are to accompany.

Dice the bacon finely. Melt the butter in a pan, add the bacon and fry gently for a few minutes. Halve the leeks lengthways, then rinse them thoroughly under cold, running water. Slice the leeks finely then add them to the bacon. Cover with a lid and let them cook over a low to moderate heat for a good 15 minutes till they are soft, but not coloured. Pour in the stock, bring to the boil, then add the roughly chopped parsley. Lower the heat to a simmer and leave to cook for 25 to 30 minutes. Season generously.

Make the rosemary paste by putting the olive oil into a food processor or blender with the rosemary needles. Blitz the herbs and oil, with a little salt and pepper, till all is bright green. Cut 12 long thin slices of bread from the loaf above. Place them flat on a baking sheet, then spoon over the rosemary oil. Place under a hot grill till the bread is lightly crisp then float on top of the leek and bacon soup.

For best results, the butter should be softened but not melted. If you like cinnamon, add a half teaspoon of it to the butter.

Put the softened butter in a mixing bowl. Roughly chop the walnuts, then stir them into the butter with the grated orange zest and the raisins.

Line the base of a 22cm round cake tin with a piece of baking parchment.

On a lightly floured board or work surface, roll the dough into a rectangle measuring about 40 x 30cm. Spread the walnut and orange butter over the surface of the dough, then roll lengthways into a thick sausage.

Cut the dough into 9 fat slices, then place them cut side down in the lined cake tin, eight round the outside and one in the middle. Cover with a clean tea towel and leave to rise to the surface of the tin.

Set the oven at 200C/gas mark 6. Bake for 40 minutes till risen and golden. Remove from the oven then pour over the maple syrup and leave to cool before tearing the buns apart.