Vicky Kaushal yesterday shared several pictures of himself among the jawans, including one where he's preparing rotis for them. 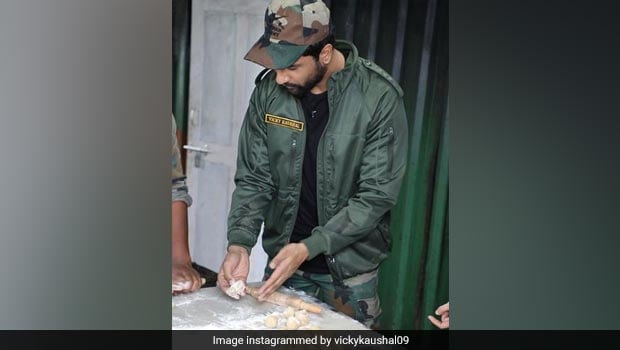 Bollywood actor Vicky Kaushal became a household name after his role in the movie 'Uri: The Surgical Strike'. The movie was the first one where Kaushal appeared as the main lead and the movie saw stupendous success at the box office. The actor will next be essaying the role of Sardar Udham Singh, who was an Indian revolutionary. Another much-awaited project that Vicky Kaushal's fans can't wait for is the multi-starrer 'Takht', which will also see Alia Bhatt, Kareena Kapoor, Ranveer Singh and Janhvi Kapoor in key roles. The actor is currently however, having the time of his life with the jawans of the Indian Army at the Indo-China border. Kaushal is shooting an episode for NDTV's show Jai Jawan, which will air on Independence Day, August 15th 2019.

Vicky Kaushal yesterday shared several pictures of himself among the jawans. One of these pictures showed him cooking rotis. He captioned the image as, "The first ever roti I made... glad it was for the army."

We just can't wait to see just how round Kaushal's roti's came out to be! Guess we'll all have to wait for August 15th to know. The 31-year-old actor looked quite at ease in the camouflage colours as he has sported the uniform for his role as a para special force officer in 'Uri'. In another post dedicated to his time at the border, Kaushal said, "Elated to be getting an opportunity to spend a few days with our Indian Army posted at 14,000ft altitude at the Indo-China border of Tawang, Arunachal Pradesh." The picture showed him standing among the jawans with folded hands.

Kaushal will be portraying the role of another tall personality of the Indian Armed Forced- India's first Field Marshal Sam Manekshaw. The film will be directed by Meghna Gulzar, who also directed 'Raazi', in which Kaushal played a key role opposite the main lead Alia Bhatt.