Readers' Choice: 16 Of The Best Biryani Places In India

Biryani is undoubtedly one of the most popular dishes around the country and even abroad. Here is a list of best biryani places that our readers' thought serves the dish best! 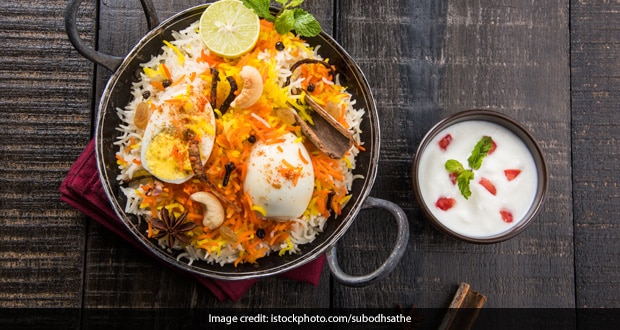 Here are 16 of the best biryani places that our readers' love.

There is something about biryani that one can never get enough of it. The rich and aromatic rice dish is enough to take any dinner party a notch higher. A plate of juicy, succulent meat combined with rice and aromatic spices is simply irresistible, even for some of our favourite celebs. Remember when recently Janhvi Kapoor was spotted binging on biryani with her friends? Or when Bipasha Basu rang in her birthday eating biryani? Have you ever heard of a dish with such an illustrious fan-following, we neither!

Mention biryani, and you have that one place in your mind that has 'the best biryani in this world'. The recent twitter war over the best biryani of India got many bigwigs of the country weighing in with their opinions. We thought of asking our readers about their go-to biryani places across India and the overwhelming response reaffirmed our faith in the country's wild passion for biryani.

Here are the best of biryani places across India that you chose for our list.

Every biryani enthusiast is most likely to know of this place and may even slurp at the mere mention. Paradise Biryani originated in a small canteen and a cafe in a cinema theatre called Paradise in Secunderabad in the year 1953. Today with over 17 outlets itself in Hyderabad, it has branched out with multiple outlets across the country including Mumbai, Kolkata, Bengaluru, Chennai and Gurugram. Their mutton biryani is a must-try.

If you are a fan of traditional Hyderabadi biryani, this is the place to be. Shadab is popular for its dum style biryani and for one of the best Haleem around the city. While you are here, make sure you do not miss out on their succulent kebabs!

All that wait for a table at Bawarchi is worth their irresistible Hyderabadi biryani. Choose from a range of mutton, chicken, fish, egg or vegetable biryani that comes in all sizes from mini to jumbo. A trip to Hyderabad is incomplete without a meal at Bawarchi.

A small place with one of the most popular biryanis in Bengaluru! Navayuga has a variety of things to offer, from chicken 65, kebabs to chicken biryani, one can order a feast here without burning a hole in pocket.

With multiple locations across Bengaluru, Meghana foods has been serving authentic Andhra style food for over a decade now. A favourite among the masses, Meghana serves tantalising starters apart from mouth-watering biryanis which includes lollypop biryani, chicken fry biryani to mushroom biryani.

A post shared by fashionably Oversized Mylord ! (@fashionablyoversizedmylord) on Apr 13, 2017 at 12:52am PDT

You cannot go to Lucknow and not have the chicken biryani at Wahid biryani. A heaven for biryani lovers, the dish is cooked in dum style and packs a range of chicken and mutton delicacies that can leave you craving for more.

A modest place with the most extraordinary biryani, Dastarkhwan is the place to be for finger-licking Mughlai cuisine. The biryani has juicy succulent meat tossed in seasoned rice and flavourful spices.

Kebabs and Lucknow go hand in hand and Tundey kebabi is one place that is unmissable when it comes to kebabs and biryanis. Situated in the midst of Aminabad market, Tundey Kebabi is packed with people especially during the lunch hour for mouth-watering biryanis.

A haven for mutton biryani lovers! This place is never going to disappoint if you are craving for authentic Awadhi flavours and some amazing biryani platters. Missing this place when in Lucknow is a strict no-no in the foodie universe.

Available only in evenings, this can easily be everyone's go-to place for the popular Lucknowi biryani that is known to be prepared with rice and meat cooked separately, layered together. A typical dhaba like-setting may be off-putting for some, but the biryani is sure to make up for everything here.

Nestled in the compound of the iconic Matka Peer Dargah, Babu Shahi Bawarchi has made the place popular with its star dish of Biryani. Mostly known for takeaway orders and biryani is sold in bulk too with a prior 24 hours' notice. The dishes that are available to walk-in customers include Chicken Biryani, Mutton Galouti Kebabs, Chicken Korma with roomali rotis and rolls.

Lajpat Nagar boasts of some of the most popular eating spots in Delhi and Ambersari has some of the best non-vegetarian delicacies to offer. From rich and greasy mutton curry to kebabs and aromatic biryani, this small shop has something for everyone.

Old Delhi is the hub of Delhi's iconic street food. Al Jawahar is one of the crown jewels of Old Delhi's rich street-food fare, serving sumptuous non-vegetarian treats. Name any popular kebab and you are sure to find it here. Mutton achaar or chicken achaar biryani are some of the most popular options here.

Bengalis missing the aloo in biryani, head to Kolkata Biryani House! Kolkata style biryani made with an array of mild spices tossed in with rice and succulent meat- this little biryani place is offering a lip-smacking affair.

It is said that the legendary eatery serves about 600 plates of biryani every day. Andhra Bhavan has made a mark for coming closest to Andhra cuisine in the capital city. The Hyderabadi chicken dum biryani served on Sunday's for lunch is teeming with succulent chicken pieces and the fluffy, non-greasy rice with simple flavours.

Did we miss out on your favourite biryani place in India? Let us know in the comments section below!