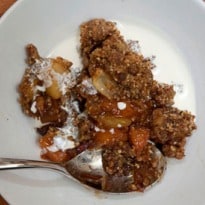 This week Felicity Cloake referees a no-ingredients-barred crumble rumble. The oven mitts are off - and there can be only one winner.

Few dishes are closer to my heart than crumble, but it's always tempting to stick with the same old favourites, so I was delighted to have so many new versions to play with this week. Arbroath smokies, Pakistani pear and ginger and even something calling itself a "pataphysical" conceptual crumble are all on the to-do list, but my current favourite is Marie-Joelle Schmidt's innovative take on pumpkin pie. The combination of sweetly spiced squash, tart apple and a nutty, treacly topping is inspired. Comforting crumble, but not as you know it.

I came up with this crumble on a cold winter's day when I fancied a sweet, spicy, warming and comforting dessert that would also be good for me. Sweet pumpkin pie is popular, so I thought: why not turn it upside down? I added apples for freshness and replaced half the butter with rapeseed oil, which adds a nice nutty taste and increases the nutritional value of the dish. Marie-Joelle Schmidt, auldfoodallianz.blogspot.com

1 Preheat the oven to 180C/350F/gas mark 4. Peel and cut the pumpkin into small chunks and place them in a buttered ovenproof dish. Break the star anise into little pieces and mix them with the pumpkin. Drizzle with half the honey and bake for 10 minutes.

3 In a food processor or with your fingertips, mix the flour, oatmeal, butter, oil, sugar and cinnamon into crumbs and sprinkle on top of the pumpkin and apple. Bake for about 30-35 minutes until bubbly and golden brown.

This recipe uses flavours that always work together in any combination: sausage, onions, cider and cheese. In this snowy weather, I reckon this crumble hits the mark just like a pile of bangers and mash. Mark Edwards, buttazblog.blogspot.co.uk

1 Add a dash of oil to a frying pan and pop it on the lowest heat. Add the onions and leave for 45 minutes until soft and caramelised, stirring occasionally. Preheat the oven to 190C/375F/gas mark 5.

2 In a large, lightly oiled pan, brown the sausages. In the same pan quickly fry the mushrooms, just to get a little colour on them. Cut each sausage diagonally into four pieces.

3 Deglaze the pan with cider, add the sausages, apples, onions and herbs and allow to reduce slightly. Season to taste. Spoon into an ovenproof dish.

4 To make the topping, rub the butter and flour together until the mixture resembles breadcrumbs. Mix in the mustard powder, cheese and parsley. Season and spread evenly over the sausage mix.

5 Bake for about 30 minutes until golden and the savoury sausagey goodness is bubbling around the sides.

The apples and pears are delicious fried in butter and maple syrup first, before being topped with the knobbly, nutty crumble of walnuts, spelt and oats. Joanna Carroll, whatjoannaate.com

1 Preheat the oven to 200C/400F/gas mark 6. To make the topping, rub the butter into the flours with your fingertips or blend in a food processor until it resembles breadcrumbs. Stir in the sugar, walnuts and oats.

2 Melt the butter in a large frying pan, before adding the apples and pears. Cook for 5 minutes or so over a medium heat until they start to soften. Add the maple syrup and cook for a couple more minutes.

3 Put the fruit into a shallow baking dish, then sprinkle with the crumble topping. Bake for 25 minutes or so until golden.

This recipe actually came to me in a dream (no joke): the squidgy caramel, sharp apple and buttery crumble made me salivate in my sleep to the extent that I immediately had to try to recreate it in the morning. Robyn Cutforth, tinnedravioliontoast.blogspot.co.uk

1 Preheat the oven to 180C/350F/gas mark 4 and line a 20cm square tin with greaseproof paper, leaving an inch of paper sticking up around the edge so you can lift out the squares later.

2 In a food processor, pulse all the ingredients for the shortbread base together until they resemble breadcrumbs. Press down evenly in the tin and prick all over with a fork. Bake for 5 minutes, then reduce the heat to 150C/300F/gas mark 2 and bake for a further 35 minutes. Set aside to cool. Turn the heat up to 200C/400F/gas mark 6.

3 Melt together the butter, condensed milk and sugar in a saucepan over a medium heat then bring to the boil and simmer for 5 minutes, stirring occasionally so it doesn't burn.

4 Meanwhile, fry the apples for a couple of minutes in a pan with a little butter until soft. Spread the toffee on to the shortbread base, then spread the apple over the top.

5 In a food processor pulse the topping ingredients into crumbs. Spread them evenly over the apples and toffee. Make sure that all the toffee is covered by the crumble so that it doesn't burn.

6 Bake for 25-30 minutes until the crumble is golden. Cool before removing from the tray and cutting into 4cm squares.

Living within spitting distance of the famous Yorkshire Rhubarb Triangle, my family are rhubarb connoisseurs. This crumble, made with almonds instead of flour and containing nuts, seeds and dried fruits, makes a more interesting topping to complement the delicate taste and texture of the fruit. Try it! "It's grand as owt" as we say up north. Diane Kitchen, Ilkley

1 Heat the oven to 180C/350F/gas mark 4. Mix the raisins, dates, sugar, ground almonds and sunflower seeds. Rub in the butter to make a breadcrumb-like mixture. Stir in the chopped nuts.

2 Mix together the chopped rhubarb, lemon juice and cinnamon in a shallow ovenproof dish and sprinkle with demerara sugar.

3 Top with the crumble and bake for 40 minutes until golden brown. Serve with whipped cream.